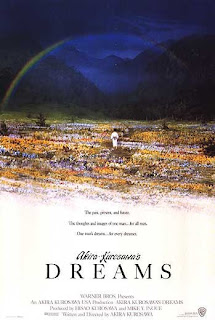 8 dreams from Akira Kurosawa: a boy notices that it's raining even though it's a sunny day. That's because of the fox weddings, but he only meets some masked people in the forest and heads back home...A boy follows a girl and meets costumed people who becomes trees...Some mountaineers walk through a blizzard. One of them sees a fairy that disappears. He arrives at a tent and saves himself...A soldier enters a tunnel. A dog barks on him. Then dead soldiers with blue skin show up, obeying his request to leave him...A man looks at Vincent Van Gogh's paintings. Suddenly, he is in one of them and meets the artist personally...A nuclear power plant explodes neat the Mount Fuji. A couple of survivors are hit by a red, radioactive smoke...A man meets a sad demon-man on a hill and runs away from him...A young lad is walking through a village. There are watermills on the river. He meets an old man who is celebrating the funeral of his wife.

The fore fore last film by the famous director Akira Kurosawa who shot it based on his own 8 dreams, and where even Martin Scorsese plays a small role of Vincent Van Gogh in one episode, is a demanding, yet stiff, sometimes even boring achievement that shows how even the greatest master get worn out with age. All the surreal episodes with numerous characters are deprived from the problems of consistency, logic and cohesion, but they completely lack a real spark. The main question is: is there something miraculously unforgettable in "Dreams"? The answer is: no. Even though they are opulent and unusual, the short abstract stories all end up too real and not dreamy enough. The only special scenes are not miraculous: the explosion of the nuclear power plant near the Mount Fuji and a 8 foot tall dandelion. The rest seems as if Kurosawa didn't have that imaginative visions or simply didn't manage to show them in an interesting way.