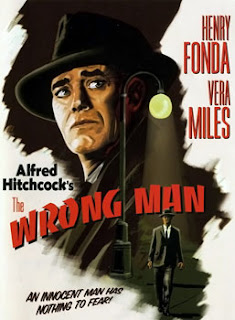 Innocent musician Manny Balestrero is arrested because he fits the description of a serial robber. The police send him to walk around the stores that were robbed to see if the clerks will recognize him. After they make him write a note and analyze his handwriting and some ladies identify him as the robber, he is sent to jail. Luckily, he is bailed out by his wife Rose and his brother in law. They hire a lawyer and start investigating to find out about the real robber. Rose looses her sanity and lands in a sanitarium, but the real robber strikes again and Manny is freed of charges.

One of the lesser films directed by Alfred Hitchcock, drama "The Wong Man", based on a true story, is a competent, calm and quality made, but somehow mild film that seems more as if the 'master of suspense' just rushed to shoot it in order to fulfill his contract commitment with Warner Brothers and less as a unique work of inspiration. The most successful parts of the films involving Hitchcock's often theme of 'mistaken identity' are the one at the beginning where the innocent hero Manny is petrified from fear when the police send him to jail, showing that long procedure in passionate detail, from his cuffing to a criminal, transportation in a police wagon up to this arrival behind bars. The film has a lot of potentials, and even fulfills some of them, but once Manny is bailed out of jail, somewhere half way into the film, and investigates with his wife Rose, "The Wrong Man" starts suffering from the 'stranded whale' syndrome since it doesn't lead to nowhere. Hitchcock creates a few neat tricks here and there, yet the story inevitably sinks into sentimentality, routine and mild tone that doesn't manage to hook up with the interesting start.