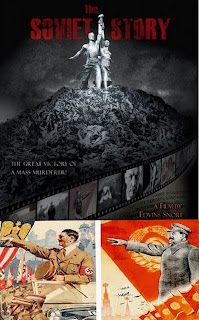 The documentary chronicles the war crimes of the Bolshevik-Nazi regime and argues that they overlap finely because they were two sides of the same coin - dictatorship. It illustrates this with the signing of the Ribbentrop-Molotov pact, the NKVD-Gestapo conferences, the Soviet supply of the Third Reich with resources (prior to '41) with which Hitler's army invaded Europe's countries, as well as absence of democracy, plurality of opinion or rule of law in both countries. Even after World War II, the film highlights how the USSR continued to keep restrictive measures against its citizens and failed to undergo a transition towards peace, democracy and human rights, all until its break-up in '91

Edvins Snore's documentary "The Soviet Story" caused quite a controversy, with some praising it, while others attacking it for bias and "Shibboleth". Objectively speaking, the film does trip at least 4-5 times due to presenting incorrect or exaggerated data - for instance, it claims that 7 million people died in Holodomor, even though the number of 3 million is probably more accurate; it implies that the inspiration of the Nazi camps came from the Soviet gulags, even though it probably came from Germany's own camps that kept the Herero and Namaqua people; it claims that only a "fraction of the Soviet war dead came from the German army", since the Soviets forced their Red Army members to charge forward by shooting at them from behind, yet that does not give amnesty to the Third Reich for attacking the USSR in the first place, etc. - yet, even when that is put into equation, what is not most surprising is when the film got it wrong, but how much it got it right when it got it completely right.

The comparisons of the Bolshevik-Nazi regimes are indeed chilling and thought-provocative, whereas some historical facts about their collaboration and/or parallels are impossible to deny: the Russian military victory parade of '39, together with the Nazi army in Brest-Litovsk; the Bolshevik-Nazi invasion of Poland; the initial confusion of the Katyn massacre perpetrators, the medical experimentation in the Butugychag gulag etc. Some more serious scholars and academics, like Norman Davies and Boris Sokolov, give the film weight. However, more time should have been given to them, and less to the author who edited a few biased conclusions. The most wrong conclusion in the entire film is that all the evil in the Bolshevik-Nazi regime can be tracked down to Marx's theory of Socialism, since worker's rights (i.e. trying to escape poverty with decent wages and exploitation of the factories) are not entirely wrong per se, but just their executions. The point that the film missed is surprisingly obvious. Fascism=Greater Italy. Nazism=Greater Germany. Bolshevism=Greater Russia. All the evils stemmed from their territorial irredentism and extremist nationalism, and in Russia's case, it deserves to be coined into a new term: Goreshism (=territorial Greed+territorial Glutony+extremist territorial irredentism), since it represent unnecessary tendencies of territorial expansionism of a country that is already the largest country in the world, and thus does not need to expand anymore, on the expense of smaller nations. Nobody is dying anymore today due to Greater Germany or Greater Italy. But people are still dying due to Greater Russia. As if the movie is saying that peace, normality and human rights in Europe did not arrive when others imposed their will on Italians and Germans to abandon Greater Germany and Greater Italy, but when those two nations voluntarily grew up, matured and abandoned those concepts from within. The same can thus be applied at the time when the film was released: Russia has a great history and gave an invaluable contribution to humanity's art, culture and science, but peace and normality will not arrive in Europe as long as Russians do not abandon their Goreshist concept of Greater Russia by themselves. As the movie implies, being anti-Fascist is not enough anymore. You have to be anti-Totalitarianist as well.