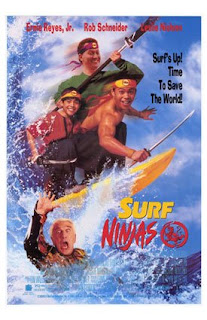 Secluded somewhere around the Californian coast, two Asian-American teenagers, Johnny and Adam, live only to surf on the sea, ignoring school and their other chores. After they get attacked, they meet an Asian man, Zatch, who reveals them that they are the long lost sons of a king of some unknown Pacific island, and that the evil dictator, Colonel Chi, wants to eliminate them because they are princes and therefor can claim the island. Together with their friend Iggy, Johnny and Adam beat Chi's army and save the island.

When a film contains a few dumb and childish gags, one can forgive the director and writer for that little misstep, but if a film consist entirely out of them and is filled with stupidity and ridiculousness for the whole 80 minutes, then that's unbearable. "Surf Ninjas" is another sad contribution to the sub genre of dumb comedies that are not funny, averagely directed and poorly realized. The basic plot concept about two normal teenage brothers from California who discover that they are actually princes and heirs to an island that must be saved is great and has potential, mirroring the adventure tone of many films, yet the whole broad execution of that idea is thin and fails on almost every detail and every aspect - not even the mood of the beach or Leslie Nielsen's solid performance of an awful role of Colonel Chi managed to create something interesting in "Surf Ninjas", a bad film whose 5 minutes already seem exhausting. The movie simply doesn't have nothing. Nothing. The gags are really bellow any level - the greatest impact one gag leaves is the one where Chi has problems controlling his robotic arm (in an obvious "Dr. Strangelove" rip-off) so at one moment he grabs himself at his crotch. Truly, when a kick in the crotch is used in comedy, one doesn't have to be a genius to figure out the thing is probably nonsense. Not to mention other embarrassing moments, like the one where a girl "flirts" with a bad guy to lure him to a place where he can be beaten. Surprisingly, Rob Schneider's performance is tolerable for a change, but that doesn't help much. Despite a few atempts to gain sympathies, "Surf Ninjas" is of those shaky films that are so bad that they cause one to run away and search for help in old masterworks like "Citizen Kane" to bring the faith back in cinema.