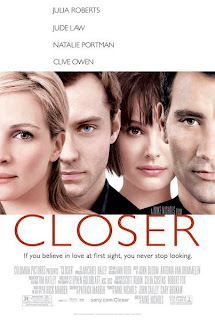 London. Dan Woolf, a young writer, meets American stripper Alice on the street and starts a relationship with her. A year later Dan kisses Anna, a photographer who was taking a picture for his book, and Alice senses something. Another year later, Dan plays a prank on dermatologist Larry by "arranging" a blind date on the Internet chat room with Anna. But Larry and Anna actually like each other and marry. Another year later, Anna breaks up with Larry and admits she has an affair with Dan. Dan also breaks up with Alice. Larry and Alice meet in a strip bar and have an affair. Anna leaves Dan and returns to Larry, while Alice can't renew the relationship with Dan and returns to New York.

"Closer" is another welcomed contribution to the fresh sub genre of "character movies" that show how everyday human relationships and emotions can be more fascinating than some large monsters and explosions. The wonderfully tightly written script presents a quadruple relationship between the 4 main characters, who are evidently at the same time the only catalyst characters in the story, in which two couples exchanged intimacy between each other - except in the gay context. Except for miscast Julia Roberts as Anna, every other actor delivered a great performance, from brilliant Clive Owen as dermatologist Larry (who won a BAFTA, a Golden Globe and was nominated for an Oscar) up to the very good Natalie Portman as stripper Alice (who won a Golden Globe and was nominated for an Oscar and BAFTA). The movie gains it's energy with the help of small little details, like the one in the exposition where Dan is talking to Alice in the bus and she suddenly takes his glasses, puffs into them and cleans them, or the whole brilliantly executed false Internet chat sequence where Dan is fooling Larry into thinking he is talking with a nymphomaniac woman who wants to sleep with him, upon which Larry gives the computer a puzzled stare and goes on to close the door to continue to chat. Also, the dialogues are mostly strong (Dan says to Alice: "Cheating is bad, I don't want to make it look better"), even though some seem artificial, emphasizing the theme of some mysterious urge of lonely people who seek an adventure with someone else, hoping that person will be spiritually closer than her/ his present partner. The movie is very good up until the last third when it falls apart, resulting in an pointless ending, turning into something like an ambitious soap opera with too many rough edges, but still, "Closer" became very close to the viewer's mind.