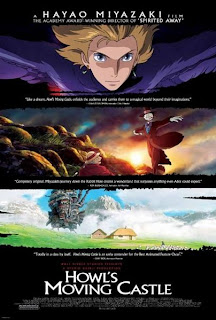 Sophie is a shy unconfident 18-year old girl working in a hat factory in some imaginary country. She is a quiet and passive girl that more vegetates than she lives her life. One evening a spoiled obese Witch of Waste enters the shop and transforms her into a 90-year old lady. Ashamed, Sophie leaves her home to live on a mountain, but accidentally enters into a strange moving castle of a young wizard called Haru who hires her as a servant. A war escalates in the country because of a disappearance of the prince while Madam Suliman, the head sorceress, wants Haru to work for her. Sophie admits to Haru she is in love with him and becomes young again, while a nearby scarecrow transforms into the missing prince.

Hayao Miyazaki's 9th feature length film, anime fantasy "Howl's Moving Castle" nominated for an Oscar as best animated feature, is an underrated fairytale and authors best achievement from all the way back in his golden '80s phase. Poetic sequences like the one where sheeps are grazing grass while Howl's castle is walking on the meadow in the background or the cute one where Haru and a confused Sophie "walk" with their legs while they are flying in the air are a real treat in the first half, but towards the end the situations become more and more bizarre and surreal, turning into a Felliniesque fantasy without a tight cause-consequence thread causing the film to get very strained by the critics. In essence, it's a symbolic story in which a young Sophie lived her life without passion like a dead person for which it was transformed into an old woman (and she stayed like that for about 3/4 of the film), but discovering and admitting her love for Haru she discovered her real passion and found her true youth and spirit. A lot of the story doesn't make any sense since it's free from logic, enrolled in it's own way of thinking and Miyazaki went deeper into the bizarre than ever before, but the movie is surprisingly funny, emotional, quirky and romantic in a shifted and distorted way, while the character of Sophie is wonderfully charming - while she is young.