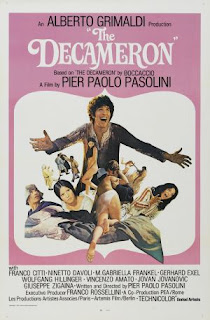 14th Century. A woman tricks the naive Andreuccio that she is his sister. As he prepares to spend the night at her apartment, he is thrown out through a trap door while trying to go on a toilet. The woman then keeps all his money he left behind, leaving him alone on the street at night. But he becomes rich by plundering graves...  A woman is hiding her lover in a vase from her husband... A young lad pretends to be mute and gets a job as a gardener in a convent. But all the nuns want to lose virginity with him, since they expect he will not be able to tell anyone, anyway. However, after too many of them line up, he rebels and speaks up... A painter is making a mural in a church... A girl, Caterina, places her bed on the open so that her lover could visit her... The three brothers eliminate the lover of their sister... A priest tricks a fool by promising to transform his wife into a mule at day in order to help him at his farm... A man dies and his ghost shows up to proclaim his brother that it's not a sin to have sex.

This adaptation of Boccaccio's erotic humorous novel "The Decameron" offers excellent fun and is one of the most cheerful in the hermetic opus of director Pier Paolo Pasolini, launching his "Trilogy of Life" that celebrates joy, happiness and freedom. Pasolini infiltrated his Marxist view into the story that critiques the class difference, but also openly portrayed the beauty of unbound first love, not hesitating to show naked guys and girls, while the novel was well chosen since its sharp wit seems rebellious even today, listing numerous satirical events (the grave plunderers make a sign of cross and knee down before they exit the church; the mute gardener with whom all the nuns want to sleep with - because they think he won't be able to say anything anyway - finally protests and speaks out: "I didn't know what kind of a job this would be! A rooster can satisfy all the chicken, but all the men couldn't satisfy all of you!"; a ghost announces to a man that it's not a sin to have sex and the lad immediately "jumps" on a woman). It even features two perspectives on young love: the tolerant one (where teenager Caterina bashfully hides with her lover when she is caught by her parents, but they just approve them) and the intolerant one right afterward (the three brothers picking against her sister's lover), showing how people can be both mature and immature. The story with the painter (Pasolini himself) who dreams about angels and the Madonna on his mural is enchanting, speaking about the sole process of creation, celebrating it as therapeutic for both the author and his audience, even if one never knows if the finished result will truly be regarded as pure art. Likewise, Pasolini leans heavily on the Italian architecture, evoking its cultural heritage and legacy as inspiration. Even though the drastic cuts from one episodic event to another are deliberately vague and arbitrary, the 10 stories are combined with a fine narration that re-questions some moral dogmas and accepts a human being with all of his or her flaws and virtues.