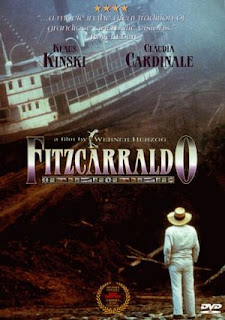 Peru around 1 9 0 0. Irish dreamer Brian S. Fitzgerald, called Fitzcarraldo, and his wife Molly, travel 1,200 miles in order to see a opera starring Enrico Caruso. Fitzcarraldo plans to build an opera for him in his town Iquitos, in the middle of the Amazon rain forest, so he collects the money from Molly and some local tycoon. He buys a steamboat, hires the crew and sails upstream the Ucayali river. Since the Indian drums become louder and louder, the crew flees from the ship. Fitzcarraldo remains with a cook, the captain and the engineer and manages to persuade the Indians that he is an emissary from God. They help him transport the ship across the hill to the other side of the river where he opens his opera.

"Fitzcarraldo" is placed highly on the Pantheon of popularity in the opus of cult directory Werner Herzog, and it's quality is already confirmed by the fact that it was nominated for a BAFTA and a Golden Globe as best foreign language film, while it won the best director award at the Cannes festival. Despite a colloid and long story, "Fitzcarraldo" persists on impressing with a fascinating sense for landscapes of the jungle while even the sole transportation of the steamboat across the hill is something egregiously unheard of for the European production of that time - the ship's weight was over 300 tones and it was real, not some special effect or a toy, which is why the viewers are lucky to even have the chance to see the film at all - if the crew had failed to move the ship, "Fitzcarraldo" would have probably never been completed or even made. But Herzog, a mad genius as he is, even forged the signature of the president to make the Peruvian army help him in that attempt. The lifting of the ship has many symbols: for some, it's an allegory of labour, for the others the realization of a dream despite obstacles, a test of maturing or even the arrival of civilisation in the jungle. Herzog also has a few twisted jokes that "soften" the slow rhythm of the story: a soldier gives a horse some champagne; a tycoon is in ecstasy while losing in a poker game while he even feeds his fishes with pennies. This is probably the best Herzog-Kinski film, but it's still not a masterwork because it doesn't have that absolute author's vision to achieve it. The eccentric actor Klaus Kinski delivered an excellent role, both energetic and gentle at the same time (he even plays music to smooth the wild Indians in the jungle in one scene). And coincidentally, it's his only role in a Herzog film that doesn't end in death, but in an optimistic triumph over fate.
Grade:+++
Posted by Marin Mandir at 7:33 PM