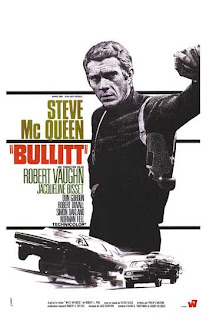 San Francisco. Cynical Lieutenant Frank Bullitt gets a ordinary assignment to guard Johnny Ross, a witness who is about to testify against the mafia, in a hotel as a demand by the politician Chalmers. The same night two men storm in into the hotel and shoot and wound Ross and Inspector Stanton. Bullitt can't figure out how these men knew where Ross was, especially since they even show up in the hospital to finish him off, but he stops them. Ross dies, but Bullitt makes the doctor misplace his chart and pretend he is still alive in some other hospital. With time, Bullitt finds out the dead Ross was actually Albert Renick, who changed identities with him to escape the mafia. Bullitt finds the real Ross at the airport and shoots him after he starts attacking people.

Classic "Bullitt" is sadly a forgotten jewel among juicy crime movies: Peter Yates directs the whole film with a unusual visual style using hand held camera and bizarre camera angles, spreading his rebellious spirit - which protests against safe and standard movie making - to every element of the story. The movie is "invisibly" influential because of two facts: for one, it started the trend of cynical, self-willed Detectives with the main hero Bullitt who does everything his way, sometimes even beyond the law (a subversively comical scene where he orders a doctor to misplace the chart of the dead witness Ross and pretend he is still alive until he tracks down the gangsters who wanted to eliminate him), much before "Dirty Harry" and others. The other one is the famous, 8-minute long car chase sequence between two cars from San Francisco to a highway, filmed entirely without any dialogues: although they were indeed better car chase sequences filmed later on, this one remains a great role model to future films like "The French Connection". Shaky, restless, energetic, resisting to get pinned down under any category of the '60s era, filled with nice little details (in one scene in a restaurant a waiter picks up the menu and accidentally bruises Bullitt's head with it when passing by it; Bullitt shopping for frozen diners) and good dialogues (in one scene Chalmers says to Bullitt: "You know you have to sell your integrity to the public" upon which he replies: "What ever you're selling, don't sell it tonight"), "Bullitt" is a smart film that believes in the intelligence of the viewers, refusing even to explain some parts of the complicated story about the protected witness who changed his identity with someone else, which will probably remain its biggest flaw.