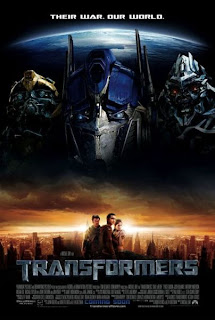 Sam Witwicky is a young lad who buys his first car, a Chevrolet Camaro, and drives an attractive girl, Mikaela, to her home. But it turns out his car is a Transformer called Bumblebee, one of the good Autobots led by Optimus Prime who are in search for the mysterious Cube Allspark that can renew their world, as opposed to the evil Decepticons led by Megatron who want it to rule the Universe. The government agents bring Sam and Mikaela to the Hoover dam, where a frozen Megtron and the Cube were placed there a long time ago. Megatron escapes an attacks New York, but the Autobots are able to destroy him and stay on Earth.

"Transformers", the live action movie adaptation of the famous 80s cartoon, is a solid Sci-Fi action film that will probably please hard core fans, but not ambitious audience. The plot itself is nonsense - Transformers are searching for glasses of some Captain Witwicky because they were imprinted with the coordinates of the location of the Cube by Megatrons navigational system? How? By which method? - and suffers from illogical situations (it seems a 6 foot tall guy can run faster than a 60 foot tall robot; when Air Force One plane lands on the airport the evil mini-Transformer Frenzy laughably simple exits from it and passes by numerous agents without getting noticed) and dumb moments (Mikaela and Sam are slightly scared because they are driving in the Transformers car Camaro so she doesn't want to sit at the drivers seat. Sam then proposes: "Why don't you sit on my lap?" And she does - obviously irrelevant to the fact that it doesn't matter on which seat she is sitting since she is in the car herself!), but the biggest problem is that it doesn't manage to capture the nostalgia of the cartoon. Still, there are some virtues present. One of them is the charming human hero Sam Witwicky, played amusingly by Shia LeBeouf who manages to capture the confusing state of youngsters. In one of the best scenes, he spots the girl of his dreams, Mikaela, walking to her home, while his (Transformers) car "magically" turns on the song "Drive" with the lyrics "Drive her home", stimulating him give her a ride.

Not all characters seem realistic and alive, but the infamous statement that a viewer "won't care about the fate of characters in danger if they are one dimensional" is false, because no matter how one dimensional a person is, one will always automatically feel empathy for her/him due to human instincts. Non the less, there are too many characters present - although Jon Voight and John Turturro are funny as the secretary of defense and the secret agent, their roles could have been easily disposed off, as well as some 15 other ones. Also, even if the human characters work, the robot characters don't - sadly, the Transformers have been turned into supporting characters and some of them speak only barely 2 lines during the whole film. Not even Optimus Prime managed to turn out something more than a stiff, pale puppet. Michael Bay is an OK director, but pompous beyond belief, always coaxing the wider audience, although he has a fresh dose of irony here: in one scene few Transformers crashed from the sky and some kids are curiously rushing towards them, one of them saying: "This is going to be 100 times better than "Armageddon", I swear!" It's nice that Bay can joke on his own account, but it doesn't help that he just continues with his mannerism - primitivism and shots that don't last longer than 2 seconds are annoying. The final battle is spectacular, but ironically also boring at the same time due to frenetic rhythm where it's hard to figure out who is fighting who: action sequences from "The Blues Brothers", "T2" and "Hard Boiled" were choreographed much better. "Transformers" are just like fast food: sweet and tasty, but you can't help to think there is something better out there.

How true is that stamenet. With less shaky camera I would have enjoyed this film a lot more.