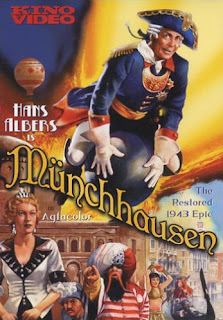 20th Century. Baron Munchhausen tells the story of his life to a young and curious couple in his garden: at first he lived in Germany, but then left to Russia's territory in the 18th Century. In Saint Petersburg he met and seduced Catherine the Great who hired him as a servant. In the duel with the count Potemkyn he was wounded, so one doctor gave him the ability to stay as young as he wants to. In the Ottoman empire he was the slave of the Sultan but was freed when he won a bet in which a fast running man brought vine from Europe. Munchhausen also freed Isabelle and run away to Venice. Then he went to the Moon where his friend Christian died. After that he got married and settled down.

Critics who know only American films have a big hole in the cinema knowledge, especially if these "unknown" films are so good as Josef von Baky's "Münchhausen". Filmed on Goebbels' order to celebrate the 25th anniversary of the Ufa film studio, this unbelievable fantasy classic doesn't have anything to do with the Nazi politics and is filled with brave, ontological scenes that let the power of imagination loose and enchant with verdant set design: the high speed scene of the fast running man who runs with extremely fast speed from Belgrade to Little Asia in only a couple of minutes is one of the first special effects of that kind in general, while the image of Münchhausen riding on a flying cannonball and "hitting" the castle is a real jewel. Such a shining experimental movie that breaks the rules of already seen conventions and isn't ashamed of naive touch (flower-people live on the Moon) was rarely made.