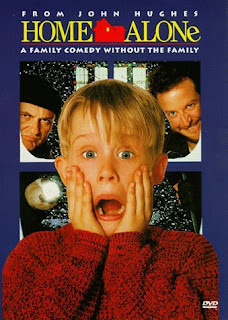 Chicago during Christmas. Kevin is an 8-year old boy living in a large family consisting of his 10 siblings, parents and uncle. One evening he has a fight with his brother Buzz and is sent to the third floor over the night as a punishment. The next morning, the family rushes to the airport to catch a flight to Paris, accidentally leaving Kevin behind at home. He manages to fight off two burglars who wanted to break into his house, Harry and Marv, while his family returns home with the next flight to Chicago.

"Home Alone" is a neat "family comedy without the family", as it slyly states in the poster tagline, that managed to become a hugely popular piece of work thanks to its attractive mix of gentle comedy and slightly cruel satire about a family which forgot their own kid at home, thus turning into one of the easily more enjoyable flat Hollywood blockbusters. Macaulay Culkin isn't as cute as the authors thinks he is, but he still delivered an excellent performance as the main protagonist, while the rather inappropriate black humor and morbid gags that appear towards the adventure 20-minute finale where Kevin has to protect his home from a "siege" of two burglars, Harry and Marv, is both the movie's highlight and its most questionable ingredient - honestly, how could the writers imagine that an 8-year old kid with a machine gun in his hands can be something sweet? - but if one is to accept the whole over-the-top "violence" as a "Tom and Jerry" kind of cartoon, the thing is actually rather amusing, fun and dynamic, especially in such scenes where Harry enters the house and a flamethrower burns his head, leaving only a small piece of hair on his new "bald spot". Not all the gags work, but the story is somehow strangely appealing for a silly mainstream comedy, creating an untypicaly anarchic "Christmas movie", though with an emotional ending, while the small roles are nicely staged, especially the brilliant comedian John Candy in a small guest appearance as Gus, the Polka king who offers Kevin's mom the ride to Chicago.