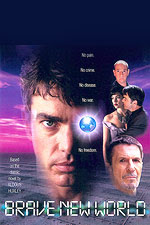 In the future, people are bred in incubators in order to in advance divide them into four classes - Alpha, Beta, Delta, Epsilon - each doing a specific kind of work; hard physical labour for the 'lower' class, intellectual kind of work for the 'upper' class. There is no religion and promiscuity is obligation. Bernard Marx is an Alpha working in the conditioning center who flies with his girlfriend Lenina in an helicopter to a savage reservation, where they crash. There they met the "savage" John and his mother and take them to civilisation to study the conditioning process on him. But the religious John is disgusted by civilisation and dies by falling off a cliff when a helicopter passes by him. Lenina and Bernard go on to have a baby.

Those who see this version of "Brave New World" might think the book from Aldous Huxley actually isn't anything special, but that's just because it's a matter of another lousy movie adaptation whose style simply can't keep up with the powerful style from the book. It's terribly annoying how the movie authors here changed the story from the book - even though the protagonists Bernard and Lenina fly off with the helicopter to the 'savage reservation' only somewhere half way into the book, here they head there already 10 minutes into the film, which means that almost 40 % of the original anti-utopian story was simply scrapped; the origin of the 'savage' John's father was here transformed into some sort of a mystery for who knows what reason while even the ending was changed, or better said, it went on after the ending of the book to add some new scenes and a new point about the individuality of the human spirit, which is valid for a loose adaptation, but seems out of place here - while the sole fact that the running time of the film is only 87 minutes shows that it's too short, especially compared to the almost 3 hour TV version from 1980's. Leonard Nimoy is great as Mustapha Mond, as is Rya Kihlstedt, and the limited budget is hardly a problem, but even if it was an original film, not based on the book, it would still seem rushed, incomplete, anemic and superficial.
Grade:+
Posted by Marin Mandir at 12:29 PM