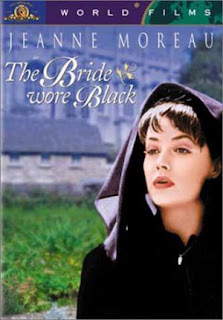 Julie Kohler leaves her mother's home and takes a long trip. She enters a hotel and asks for Mr. Bliss. After meeting him at a party, she kills him by pushing him down from the tall balcony. She meets a second man in an opera, Corey, and poisons him. She then enters the house of the politician Coral and shuts him in a trap door, where he suffocates. She then tells her motivations: a year ago, all these men, and Fergus and Rene, accidentally killed her husband on the day of their wedding when they were playing with a gun, and now she swore revenge. She finds the painter Fergus and kills him, admits everything to the police and then lands in jail, where she tracks down the last man and kills him too.

Francois Truffaut tried to imitate his big idol Hitchcock and thus directed the, for him untypical, flamboyant thriller drama "The Bride Wore Black", later admitting he wasn't satisfied with the result, together with the French critics. But looking at it today, it's an interesting result since Truffaut showed that he can make a completely un-Truffaut like film that can be enjoyed on many levels, especially since some directors later imitated him when directing their own revenge stories about a bride who goes on a killing spree to revenge her dead husband, like Tarantino and Fujita. Of course, despite all the efforts, the movie isn't that suspenseful and seems amusingly "naughty" at best - the great threatening music by Bernard Herrmann, a collaborator on many Hitchcock's films, simply somehow can't get through to the French mentality of the '60s, and thus the "threatening" sequence at the start where the bride in black leaves her mother's home and enters a train, seems rather charmingly corny than actually terrifying. Still, the ways she eliminates her 5 opponents are intriguing and gritty, like when she uses a hypodermic needle to penetrate through a bottle cork and input poison into the drink, and Jeanne Moreau is very good in her tragic role. The film is definitely overlong, but still seems more sincere about movie making than some modern day pseudo films. It was nominated for a Golden Globe as best foreign language film.