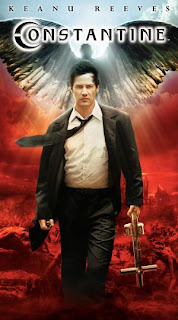 Los Angeles. John Constantine has been able to see demons in people ever since he was a kid. As a grown up, he exorcises them from people, knowing Earth is a neutral territory both for Heaven and Hell. He gets visited by police woman Angela whose twin sister apparently committed suicide. By following a long trace, he discovers the devil's son Mammon wants to cross into Earth. Constantine's helper Chas gets killed and angel Gabriel is even helping Mammon to come from Angela's body in order to bring Hell on Earth so that the people will have to earn God's salvation. Constantine kills himself and summons the devil, who stops Mammon and takes Gabriel's wings away. Constantine wishes that Angela's sister's soul gets sent to Heaven, which brings him plus points. He is brought back to life.

Even though "Constantine" isn't as good in reaching new standards in it's horror subgenre of demon fighters for the church as was let's say "Hellsing" before it and "Hellsing OVA" after it, it's still a matter of a very solid contribution with occasionally good style from director Francis Lawrence, great special effects and a few refreshing humorous additions, like the ironic one were the fearless protagonist John Constantine, who survived numerous exorcist activities, discovers he will die from lung cancer because he smoked daily ever since he was 15 or the finale where he goes on to clash with the Satan's disciples with a machine gun that looks like a cross. The movie has it's merits, but it's anemic, vague and goes on to include too many bizarre, over-the-top ideas that seem to come in raw form from the screenwriter's minds without undergoing further polishing, a finale that doesn't have any kind of logic and a powerful, but standard dark mood that doesn't captivate to the fullest. Of all the things that this film offers, the only truly great ingredient is the fantastic appearance of actress Tilda Swinton as androgynous angel Gabriel somewhere near the beginning and near the ending of the story - since her very charismatic performance lasts for only 2 minutes, one really wishes she could have been the main protagonist.