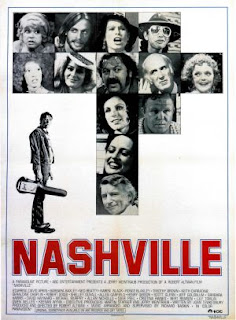 Nashville during the Country festival. Haven Hamilton is a famous Country singer who is recording his new song in a studio and prepares himself for the festival. Barbara Jean is also a singer, but unstable, just recovering after a treatment, and thus when she starts performing on stage, she collapses and lands in a hospital. Tom is a musician who wants to seperate from colleagues Bill and Mary. Sueleen Gay sings terribly and thus can't become a star. Linnea, mother of two deaf boys, gets phone calls from Tom who wants to meet her. During the festival, Kenny shoots at Hamilton and Barbara Jean.

"Politics has to be everyone's issue. When an American citizen pays his car more than Columbus did his voyage to America, then that's politics!" Says one intrusive politician somewhere near the start of the episodic drama "Nashville" who is just one of 24 charachters displayed in the story. Although ecclectic, "Nashville" is an surprisingly strong and succesful example of mosaic drama in which multiple episodes where connected into a harmonical composition that subtly mocks and ridicules Country singers. A certain minus oscilates from occasionally too long musical sequences and the cold approach, typical for Altman's objective and distanced way of film making, but he has some sharp observations wrapped up in elegant style: singer Sueleen Gay stuffs her bra with a bunch of handkerchiefs before her performance; the mentally sick Barbara Jean shows up on stage but instead of singing starts randomly talking about her farm. The film, director, screenplay and brilliant actress Lily Tomlin were all nominated for an Oscar and a Golden Globe, while the music won the awards. Also, Altman won the New York Film Critics Circle Award for best director. "Nashville" is an excellent film, but it still somehow lacks something to become a pure and all comprehensive classic, like Fellini's "The Road" or Kalatozishvili's "The Cranes Are Flying".