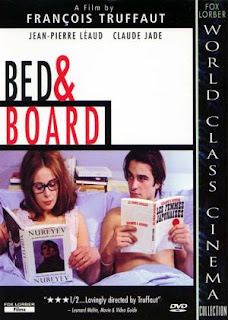 Antoine Doinel got married to his girlfriend Christine and now works as a flower salesman, while she works as a music teacher and is rather happy. Antoine tries himself in a new job as a commander of toy ships in some American company. Christine becomes pregnant and gets a boy named Alphonso by Antoine, even though she wanted a different name. But then Antoine starts an affair with the Japanese woman Kyoko, which is of course discovered by Christine. So he stops the affair and returns to his wife.

"Bed and Board" is the 4th Francois Truffaut film in which his fictional character Antoine Doinel shows up: the idea that one character gets observed through many films is genius, but here, it seems, slightly raw and roughly handled. Still, even this contribution, in which we observe Doinel how he finally got married, has enough sharp observations. "Your breasts are not the same. One is bigger than the other one. I call them Laurel and Hardy", says Doinel to his wife. At the end even a Jacques Tati clone shows up in the classic role of Monsieur Hulot with the pipe, nervously trying to enter the train. Sadly, there is simply too much empty walk and lack of inspiration, which makes one really ask why Truffaut likes his character so much. For instance, the segment of Christine's pregnancy is handled lifelessly and in the movie time it lasts for only 2 minutes, while their child is rather unnecessary for the plot. Some characters are amusing and deliver funny lines ("What do you want?" - "I want trouble!") while some aren't, like Kyoko, thus the movie is a whole is a casually made, good work that isn't as great as it could have been.