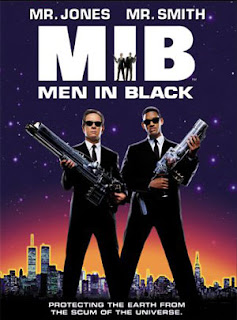 The aliens are among us: they live peacefully as immigrants and try to 'blend in', but when they go wild or loose control somebody has to stop them and keep their existence a secret. And that's the job for Men in Black, who keep people safe from those kind of monsters, among them agents K and the new recruit J. When a giant bug alien steals a small Galaxy hidden in an ornament, an other alien race threatens to destroy Earth. Luckily, K and J stop him and save the day. K has his memory erased so he can retire.

"Men in Black" obviously copied a lot from both "Ghostbusters" and "The Blues Bros.", but didn't manage to leave such as strong of an impression in the 90s as much those hits did back in the 80s. This satire on both the UFO conspiracy theory and immigrants trying to blend in failed to deliver something extraordinary, but Barry Sonnenfeld's solid direction and unusual screenplay contain enough style and fun to entertain beyond the superficial level. It's a story of accessible, sometimes even excellent gags, where the main emphasis was set on the fantastic design of the aliens that sometimes even went on to look too gruesome for comfort, but one also has to admit that the actors are great, especially the classy Tommy Lee Jones who is at the same time serious and hilarious. The best gag is definitely a quick scene that shows how even Lucas and Spielberg are aliens hiding among us.