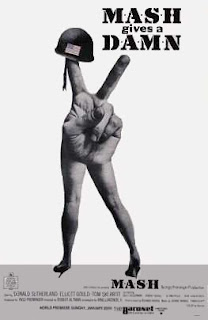 Korean war. MASH is an acronym for "mobile army surgical hospital". Doctors Hawkeye and Duke enter one military camp barely 3 miles away from the battle front with the assignment to treat the wounded, but they rather prefer having fun. Hawkeye steals a jeep right at the start and meets the religious fanatic Major Frank, whom he puts a microphone under his bed while he has intercourse with a female Major, Margaret. Hawkeye also quickly befriends Doctor Trapper John in whom he finds a soul mate, even going with him on a special mission in Tokyo to operate an important wounded man. They even organize a football game. Hawkeye and Duke get dismissed and return home.

Antiwar grotesque "MASH" is a real antipod of its genre, but it became the most commercial film in Robert Altman's career, gained cult status and inspired a popular TV show with the same title. The story is episodic, shaky, unfocused and not outstandingly funny, but excellent actors, among them Donald Sutherland and Elliott Gould, satirical mockery and a small addition of meta-reference at the end where an announcer is speaking through the loud speaker about the cast and crew ("You've been watching "MASH", a film starring Donald Sutherland, Tom Skerritt...") give it a high reputation. The whole style and set of gags are entirely relaxed and surprisingly wacky for an ambitions movie like this: when Hawkeye and Duke meet the religious fanatic, Major Frank, praying, they jokingly ask him how long he "has been suffering from these symptoms". The movie does not hesitate to make fun of him even later on - when Frank says to Major Margaret that "God brought them together", she unzips her shirt and says: "Your will be done", upon which he embraces her. It's not an accident the film influenced a bunch of mainstream comedies about mischievous heroes fighting the establishment like "Police Academy". There are a lot of deeply serious elements throughout the film, but Altman always keeps up the cheerful tone of his characters trying to create optimistic escapism in order to run away from the bitter war reality and death: by fishing, playing golf, even during the operation when a nurse scratches a doctor who complained his nose was itching. To make everything even more daring, Altman had almost every reference to the Korean war erased, deliberately trying to confuse it with the Vietnam war which was going on back in those days.