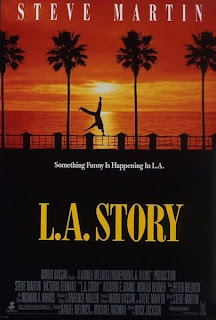 Los Angeles. Harris Telemacher is middle aged weatherman who is slowly getting fed up with his superficial and boring life, embodied in the relationship with Trudi, even though they both don't love each other. One day he meets Sara, a journalist from London, and falls in love with her. At the same time, a freeway sign gives him advice in his life. He starts a lousy relationship with the young SanDaE and looses his job, while Sara has a small fling with her ex husband Roland. Just as she is about to leave the town, a strong storm shuts down the airport and leads her back to Harris.

Of all the mainstream comedies that you are going to forget, "L. A. Story" will be one that will trigger the biggest feeling of bad conscience because you will feel you have underrated it. That's mostly due to two absolutely fantastic scenes featuring Enya's songs "On Your Shore", "Exile" and "Epona" that send shivers down the spine. But after re-watching and revaluing "L. A. Story" again, you will again conclude that the whole story seems rather bothersome and that you are only eager to see those two scenes again. Steve Martin gave probably one of his 2-3 best performances in his career as the neurotic weatherman Harris, but his screenplay is deeply unorganized, chaotic and uneven, featuring too many goofy low-brow humor gags that wreck the romantic mood built around them. Truly, what was the purpose of, let's say, Harris and Sara visiting a museum where they spot a jar containing "Beethoven's balls", except to indulge the low tastes of wider audience? Or someone juggling with chainsaws? Such kind of silly additions and Sarah Jessica Parker's rather misguided role of the hip SanDaE lower the film's quality, yet thanks to the esoteric touch this sympathetic comedy seems actually better than it is. That was achieved through the already mentioned Enya's songs which are the absolute highlight: in one scene, Harris and Sara enter a building and suddenly get transformed into kids again, surrounded by magical doves and two lion statues that come to life. In the other, the forces of nature prevent Sara's plain from taking off and she returns back to Harris in the rain. Both of them cause a short circuit in the mind because they seem as if a masterwork accidentally got lost in a mainstream comedy—they are either perfection or near perfection in a small, isolated glimpse inside the movie.