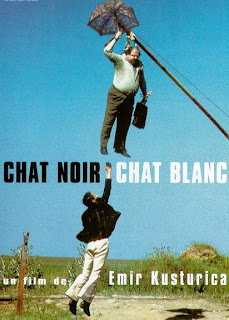 Matko is a poor Gypsy con man who lives in a old house near the Danube river with his son Zare. He earn some money by merchandising with Russians who were sailing on the river, but instead of gas they sell him water. Matko gets money for a huge deal from his uncle Grga and his son, the mobster Dadan, but a Bulgarian police officer tricks and seals him off in a train wagon. The deal is off, the policemen is found dead thus Marko figures Dadan double crossed him in order to force his Zare to marry his ugly sister Aphrodite. The couple gets forcefully married but she runs away, meets Grga's driver and marries him, while Zare marries his girlfriend. Grga and Matko's father die but get summoned back to life by two cats.

"Black Cat, White Cat" is a very good tame grotesque even though it sometimes enters the manneristic territory. Leaving his dubious political views aside, Emir Kusturica is a talented director no matter how much some people try to undermine him, and one of the reasons for that is this simple anecdotal story crafted in a very energetic way, where in accordance with the title one black and one white cat pop up here and there almost throughout the film as a running gag, while there are also plenty of quirky scenes present: at the beginning of the film, the Gypsy hero Matko is playing poker with himself; his uncle is in a wheelchair on motor drive; in order for a phone to work it's pole must be suffused; a drunk priest who burps during the wedding. Shrill, twisted and original film about the "lower layer" of society that gets avoided in most films with rich and handsome heroes, heavily leaned on Felliniesque style, with a few irritating characters and an overstretched ending, but as a whole it's an bizarrely poetic experience.

Never heard of this one. Sounds interesting though. Might have to seek this one out.