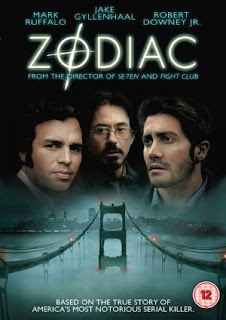 On the fourth of July '69 a couple is found murdered in a car in Vallejo. The San Francisco Chronicle editorial soon gets a letter from a man called 'Zodiac' who claims to have killed them, demanding to be placed on the main page. Cartoonist Robert Graysmith is immediately hooked by the case. The murders continue, but the police in unable to track or arrest Zodiac. They suspect Arthur Leigh Allen, but the lack of evidence sets him free. Zodiac claims to have done numerous murders even though they could be done by someone else. Another suspect, Rick Marshall, is freed of charge due to lack of evidence. 9 years later Robert tells detective Dave Toschi that he suspects Allen really is the killer. But due to evidence, the identity of Zodiac was never determined.

Anyone who ever saw "Dirty Harry" and knew that the bad guy in there, Scorpio, is based on the real elusive killer Zodiac who acted around San Francisco area in the 70s, wondered how an original movie revolving around him would look like. Director David Fincher showed it. And even included a small scene showing inserts from "Dirty Harry" that perfectly mirror the frustration of the detectives who can never catch him. "Zodiac" is an excellent crime film, but since it is known that the real killer was never caught, it disappointed a part of the audience because of its ending, even though it's pure investigation story that has a lot of surprises and is incredibly addictive. Even though a similar "Waiting for Godot" concept was already used earlier in Korea's thriller "Memories of Murder", this is an equally good achievement that never drags despite its long running time of 155 minutes due to its passionate enthusiasm that constantly brings new details in the investigation and enriches the 'one-note' thesis, while Fincher luckily abandoned his heavy, dark, grey, spot like style and directed it with wonderful simplicity - the only questionable ingredient are depictions of two murders by the Zodiac, on the 4th of July and on the lake, since they are merely speculative recreations of what could have happened without any means of finding out. Jake Gyllenhall is excellent as the cartoonist Robert Graysmith who is obsessed with discovering the killer, while the story wears chilling, creepy motive: in some situations, man is simply helpless. Even more chilling, the enemy has no face and no motive, he is invisible, which is why whole murders are presented more like a natural catastrophe than as something that can be influenced. That's precisely why the film works so subtly - in it, evil is always hidden and nobody knows what to do or how to stop it.

Loved your review for this film. I think it's awesome, and it's status will grow up with time.

Yes, I was surprised at how good it was. I'm ususally not a fan of David Fincher, but this time he delievered an excellent job. It's a really passionate film about chilling events that happened there.

It's definitely a great film, one of the best of 2007, without doubt.