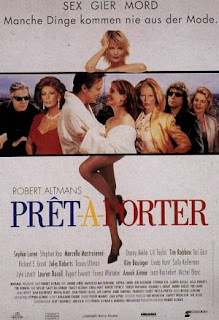 Paris. Everyone is expecting the new fashion creations and among them is the news reporter Kitty Potter who is conducting an interview with the designer Olivier. But Olivier gets visited by Sergio from Moscow and thus suffocates from a sandwich. In fear they won't accuse him, Sergio runs to the widow Isabella, with whom he had a relationship with 40 years ago. But he falls asleep during her striptease so she leaves him... Two Americans meet in a hotel room - Joe and Anne - who start a relationship...The famous fashion photographer takes photos of women who take their clothes off in his bed, so they sue him...In the end, the models present the new fashion - to be nude.

In the opening shot we find Marcello Mastroianni in Moscow, and thus in accordance to that the opening credits stating "Miramax presents: a Robert Altman film" are spelled in Cyrillic alphabet, but then the plot continues in Paris and the rest of the credits are spelled with normal Latin alphabet, while everything in the background is spinning. That neat stylish trick is probably the best ingredient in Robert Altman's worn out, listless "Pret-a-Porter", one of his weaker films because the story is a complete mess. It goes something like this: Julia Robert's character suddenly shows up and tells how she forgot her luggage in the US; the people inform Sophia Loren's character that her husband is dead and she is happy; someone says: "Sydney Poitier will play a Black man in the new film..." Altman has the right to use his same old formula of numerous parallel stories as long as he wants to, but after a certain number of films one gets the idea and the thing becomes tiresome and calculated. A whole bunch of unconnected episodes starts to irritate quickly because it has too many throw away characters, but despite the great Sophia Loren and Anouk Aimee, none of them has enough room for himself or herself. Altman once again describes the vanity of high society, this time set in the fashion industry, but without enough critique or satire, thus it wasn't clear what he was trying to say. Still, it was nominated for a Golden Globe as best motion picture - musical or comedy and supporting actress Sophia Loren.