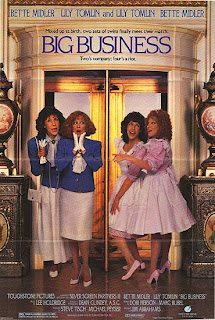 The rich Shelton family got lost in a village and gave birth to twin daughters who accidentally get mixed up with the poor Ratliffs. In 1988, in New York, the spoiled Sadie Shelton lives with her not so similar "twin" sister Rosie, while back in the poor village, the equally spoiled Rosie Ratliff lives with her "twin" sister Sadie, who actually belongs to the Sheltons. Complications occur when the poor Rosie and Sadie come to New York to save their business in the village from getting closed down by the rich Rosie and Sadie. Still, they meet and become friends, deciding to save the village.

The encounter of the two main heroines, the rich "fake" sisters, with their own poor twin sisters and their own alternative version of their lives is an interesting, double layered, but here only thinly exploited idea. Already the exposition of "Big Business" is unfunny, obviously forced, and that's already the first flaw of the film: the rich family comes to a village, gives birth to twins, and accidentally switches one of them with a poor child. It's neat, but nothing more, thus the first good gags ignites only some 11 minutes into the film, while the concept of comedy of misunderstanding of the two grown up twins can be considered the funniest when they finally meet, but sadly that happens only some 10 minutes before the end, leaving a lots of missed opportunities open. Sadly, not even Jim Abrahams, the director of the hilarious comedy "Airplane!", didn't manage to infuse the film with enough absurdity, yet somebody still managed to shine in the story: the excellent Lily Tomlin, who in her movements and stature has some special charm that is expected to amaze. All in all, the film can be summed with: two for the price of half.