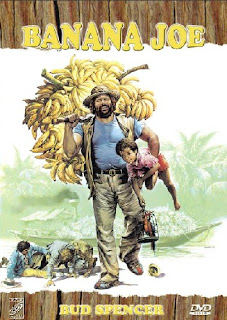 Friendly Banana Joe is a backward banana worker living in some village somewhere in Latin America. He showers with his clothes on, can't read and wonders how many bananas it takes to finance a school. His only income is transporting bananas to the town Puertogrande with his boat, but one day the mobster Torquillo decides to exclude him from the market by putting the police on his neck who demand for his trade permit. In order to get it, Joe goes to the city, becomes a bouncer in a club where he falls in love with the singer Dorianne. Since the only way to get his birth certificate is to serve the military, Joe complies, but looses his temper and gets arrested. In the end, he beats up Torquillo's men in his village.

"Banana Joe" is, just like most films from the legendary Italian comedian Bud Spencer, just a neat, sympathetic and harmless childish fun that didn't leave any impression in the history of cinema. Spencer, who also took the role of the screenwriter, plays the charmingly backward title hero with neat charisma that makes the episodic story seem more accessible and not as thin and silly as it is, while the music and the exotic shooting locations also have their virtues. The more ambitious goals set by the authors, namely the one of a satirical critique of numerous 'banana republics' and their bureaucracy, like in the scenes where Joe can't get his birth certificate in the state run center and must serve the military if he wants it, didn't achieve much, but at least they tried to make something out of them. The best gags are actually ones that are borderline cartoonish, like when the mobster Torquillo sends his 4 bodyguards to beat up Joe and numerous 'fist fighting' sounds can be heard behind the cabin, but when the bodyguards return they just fall one by one on the floor and Joe nonchalantly emerges as the winner, and the caricature tone completes it.

Really? I didn't know it was that popular.