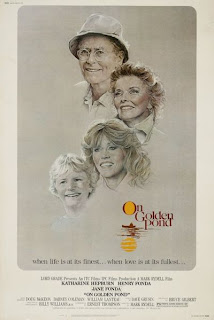 Every summer, Norman and his wife Ethel, an old, retired couple, spend some weeks in their cottage near a lake. Norman is suffering from heart disease and memory loss, and is still cold towards his daughter Chelsea who visits him on his 80th birthday. She also brings along her boyfriend, Bill, and his son, the 13-year old Billy. Chelsea and Bill head of for a vacation in Europe while Norman and Ethel stay to watch out after Billy. Still, the spoiled kid quickly starts to get along with Norman and the two enjoy fishing. Chelsea returns and announces she married Bill. She also reconciles with her dad. Norman has a heart attack, but survives and looks at the pond with Ethel.

"On the Golden Pond" is a soap opera with just enough good ingredients to make it work, especially thanks to the calm, sensitive story about people coping with the fact that they have become old, and a lighter subplot about father-daughter relationship, but mostly thanks to the energetic performance by Henry Fonda in his last big screen role before his death. Henry Fonda plays the typical role of Norman, an old, cynical grouch who "likes to set the record straight to everyone else", with charm, and some of his lines are really funny, like in the scene where he hears that his daughter Chelsea is bringing her lover Bill, who is a dentist, with her, and comments with: "A dentist! He will be staring at our teeth all the time!", or when they are late for his 80th birthday and he shouts: "Where are they? I'm getting older by the minute!", but his real life daughter Jane Fonda and Dabney Coleman are equally as good and also have their fair share where they display their talent. Whenever "Pond" gets broadcasted on TV it really looks just like that - like a TV melodrama - and in the second half it loses a lot of its wit for the sake of cliches, obvious in the moment where the boat with Billy and Norman has an accident and collides with a rock, which was just a plot device to bring some artificial danger into the story, but as a whole it is a really touching, calm and gentle film that has a lot of humane understanding towards the gap between the generations.