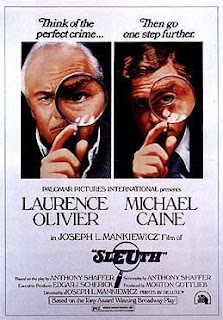 Andrew Wyke, a rich writer of detective novels, invites the hairdresser Milo Tindle to his isolated castle. Milo arrives and Andrew announces he is aware he has an affair with his wife Marguerite. The two have trivial conversations until Andrew suggests him to break into his castle just for show and steal his jewels so he can collect the insurance money. Milo accepts and follows his instructions in breaking furniture, until Andrew draws a gun and shoots him...Two days later, Inspector Toppler enters into the castle and questions Andrew about Milo's disappearance. Andrew claims he just shot Milo with blank bullets to scare him, but Toppler doesn't believe him and arrests him. Then Toppler takes off his mask and reveals he is actually Milo. He then tells him he killed Thea and planted evidence in his castle. Andrew finds them, but discovers it was all just a game. He then shoots Milo with real bullets, but the police arrive at the castle.

"Sleuth" is one of only two films where the entire cast was nominated for an Oscar. How? Simple, it has only two actors - Michael Caine and Laurence Olivier, and both were nominated for an Oscar as best actor. Having only two actors appear in one castle throughout the film created a very interesting 'kammerspiel' and served as a nice farewell from famous director Jospeh L. Mankiewicz whom this was his last film. There are only two actors, but three roles in the story, and it would be a shame to spoil the method how the authors made that trick, but that's just a part of this cleverly conceptualized cat-and-mouse plot dwelling in the theme of revenge that has more than one surprise. This unusual film, based on a play by Anthony Shaffer, starts off deceivingly calm and normal, with Milo (Caine) visiting Andrew's (Olivier) castle and getting lost in a bush labyrinth in his garden. The two of them then continue to have trivial dialogues in the castle, like when Andrew mentions he is still a "Olympic sexual athlete". The plot thickens when Andrew persuades Milo to break into his home just for show, which is then followed by three plot twists. It's better not to go into detail with the story too much, since it's one of those films that need to be experienced personally and not explained, but it will definitely cause an impressive cinematic experience. At some moments, "Sleuth" is directed in a clumsy manner and seems too silly in the first 30 minutes (Milo searches for a disguise to break into the castle, discovers some woman's clothing and says: "I might do the whole thing in drag!"), but generally it's quite a brilliant thriller-drama with tight rhythm, compact structure and great actors. "Sleuth" is an excellent little film, almost with a cult reputation, that needs to be seen to show how little it takes to create an interesting story.