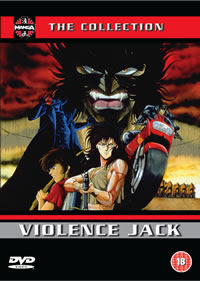 Since a powerful earthquake hit Tokyo and placed it under the ground it's citizens that managed to survive are fighting to stay alive. Food and water supplies are diminishing so the underground people divided into groups A, B and C. By accident, while digging a tunnel in order to find a way back to surface, group B releases a 20 foot tall man called Jack who was captured in the rock. Jack helps them fight against the group A that is ruled by the evil giant Inuma, but he soon leaves them when he discovers they raped women from group C. Jack eventually decides to protect the women in the group C who manage to find an exit to the surface. When the evil groups attack them, Jack kills them. Inuma transforms into a monster so Jack also kills him. On the surface, the nature is still preserved.

When the viewers read the title of this first part of the OVA anime trilogy called "Violence Jack" they will probably laugh at it's inadvertently comical banality and campy mood that stays until the end. Somewhat funny is also the presentation of the in hero, Violence Jack, a 20 foot tall (!) man that gets released from a underground cave by "normal" people - the contrast of their size at first has it's trashy charm, but pretty much even the most undemanding fans of anime will likely be disappointed: "Violence Jack" is simply unwatchable. Dumbing violence, pretentiousness, low qualities of splatter genre and gore exploited without any redeeming feature and bad animation ruined this part and it's sequels. The scenes are truly awful, from kids who find a living cockroach and eat it up to the evil giant Inuma who finds the head of his girlfriend chopped up, takes it into his arms and kisses it, and by the time the final fight starts where Inuma transforms into a monster (?) every logic is dropped and nothing is important anymore anyway, but the black and white characterization is also problematic - except for Jack, every man is portrayed as a rapist or a murderer, which is simply an insult to the male gender. Obviously, the authors wanted to make a simple action flick full of battles where the viewer can simply relax and leaves her/his brain somewhere else, but it makes one wonder what they were thinking because this is simply a chaotic mess and a stupid nonsense that doesn't even touch far superior, even intelligent achievements from the same genre, like let's say "Conan the Barbarian". It's hard to imagine that the writer of this manga and anime is Go Nagai, the same guy who wrote "Cutey Honey". Human mind can sometimes express the unimaginable highs and lows of art - this is one of the unimaginable lows of art.