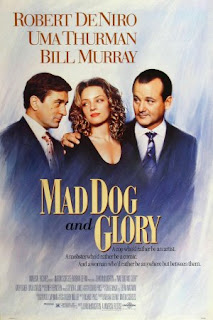 Chicago. Police photographer Wayne is nicknamed "Mad Dog" because he is terribly shy and secluded. One night, while investigating a crime scene with the police, he drops at a local store and persuades a killer to release a hostage - who turns out to be Frank Milo, a mobster. After some conversation, Frank realizes Wayne is very lonely, so he sends him his employee, the blond Glory, to be his 'personal company' for a week. Wayne is at first startled and keeps her at distance, but they slowly fall in love. When Frank demands her back, Wayne fights with him and thus gives Glory her freedom.

"Mad Dog and Glory" is one of the most unusual films of the 90s. Essentially, objectively speaking, the movie has got it all - the screenplay by Richard Price ("Sea of Love") is wonderful and rich with juicy crime details, from the exposition where a criminal is dragging the corpse of a drug dealer at night to put him in the trunk of the car and then picks up his shoe that accidentally fell off up to the later sequence where the hero Wayne is observing that scene of the crime and concludes that the blood burst about 2 feet away from the shooting. The main tangle, where precisely the introverted and shy police photographer Wayne finds himself in situation in which he gets the girl Glory in his apartment at "his service" for a whole week (with rather vague and unclear prostitute connotations) is brilliant, subtly emotional, touching and grown up while some scenes are almost masterful (for instance, the 2 minute shot in which Wayne and Glory are sitting on a couch watching television and slowly getting closer). Bill Murray is unusual in his serious role as the mobster, Robert De Niro is refreshing as the shy and lonely Wayne while the direction by John McNaughton is smooth and stylish. And yet, for some inexplicable reason, the movie as a whole seems somehow unfinished. And leaves a slightly indifferent impression. Why? As if there is no reason, not even in the rather miscast Uma Thurman or in the uneven ending without a clear point. It's as if you eat your favorite food and yet can't exactly taste it fully.