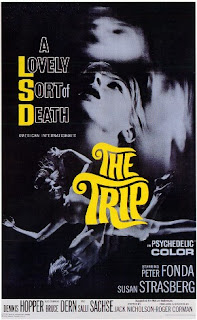 Paul Groves, director of TV commercials, is at the sea filming when his wife shows up and reminds him of the divorce contract. Paul leaves for his friend John's villa, located somewhere on the hill in Los Angeles, in order to try the drug LSD for the first time. He soon gets bizarre hallucinations where he is in the middle of a court, running away from a horseman, seeing strange colors and his wife...After a few hours, Paul leaves the mansion still under the influence of the drug and ends up in a disco, and then in a washing room. His friend returns him back to his home. The next morning he wakes up feeling as if he had a revelation.

Unknown cult film "The Trip" can truly be called a cult film, but also one of the most bizarre and avant-garde achievements of the '60s. Eclectic direction, rather surprising for the king of B-films Roger Corman, and wild editing nicely watered down the thin screenplay written by then unknown Jack Nicholson (who doesn't star in the film) composed basically just from the main protagonist Paul taking LSD, later waking up and nothing more. Th exposition starts deliberately conventional in order to fool the viewer as if the film is going to be only a "normal" drama, but after Paul takes the drug the scenes become incredibly surreal, in accordance with his subjective perception and hallucinations: anamorphic lights/quasars pass by the screen in the dark, horseman chasing him, a dwarf with a bowl of soup, fog, a couple in bed lighten by lights in form of lines...Stripped of any kind of dramaturgic structure or plot, it serves almost as an experimental film where fantasy halucinations comprise about 60 % of the running time. Despite a lack of a point, "The Trip" doesn't really glorify drugs, but just the hidden, esoteric possibilities of the mysterious mind who is trying to find out what it really is.