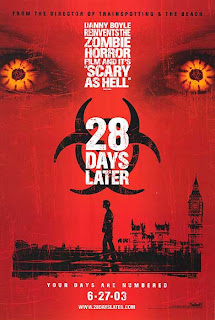 UK. Animal rights activists attempt to free a chimpanzee from a laboratory, but it's infected with a rage virus and bites one of them. The virus spreads through the whole world. 28 days later, Jim wakes up from a coma in London, unaware of the apocalypse that hit the world. He is attacked by infected men, but saved by Selena and Mark. They go to his home but find his parents dead. An infected man contaminates Mark so Selena kills them both. Jim and Selena find a middle aged man, Frank, and his daughter Hannah, and together take a trip in a car to Manchester where a radio broadcast is addressing everyone to come there. Frank is killed, while others get brought to a fortress held by soldiers who intend to force the two women to have intercourse with them. Jim kills the soldiers and escapes with Selena and Hannah.

The story in "28 Days Later" doesn't seem promising, and in a way it doesn't say much that hasn't been already said in similar post-apocalyptic films. The movie continuously traverses between a bad and a good film, art and trash, serious Sci-Fi and campy horror, but never manages to find a real focus, although it has some strong, bitter messages to say. In a way, the main message is brilliant and chilling - the virus is actually hate, it spreads and contaminates the peoples mind who don't know what they're doing anymore and destroys the human race. Already in the opening shots, a set of TVs in a laboratory is broadcasting numerous clips of people attacking people, being violent to each other. When the virus spread it contaminated the whole world in only 4 weeks, turned people into violent zombies, but just emphasized the actions those people already did. As the general said somewhere near the end of the film: "People killed people even 4 weeks before that, and 4 weeks before that, and 4 weeks before that. To me, this is a state of normality", underlying the ever fragile relativity of civilisation. The film has a few powerful scenes, like the one where Jim is walking through the empty streets of London, or when he reads the touching testament of his dead parents who committed suicide in his home ("We joined you in our dreams, Jim. Don't wake up."), but the only truly good segment is the one where Jim, Selena, Hannah and Frank are taking a long trip in a car to Manchester - it's a cleverly and realistically executed part of the film, and arguably it would have been better had the whole film revolved just around that. From the final segment revolving around the fortress and the soldiers the story went downhill, turning into a chaotic, unconvincing mess with blatant messages about the universal zombies in everyone (up until that point, all zombies were filmed in a frenzy camera movement, but then even normal people were filmed that way), going truly overboard into masochism, dumbing violence and grotesque darkness without limits. In the end, Romero's good old classic "The Night of the Living Dead" from '68 is still a superior contribution.