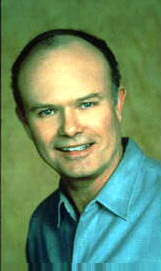 Myron Castleman, a middle aged employee, is standing in the middle of the road. It's 12:01 and he goes to a park to eat his lunch. He sits on a bench and starts talking with Dolores, a woman sitting next to him. Eventually he reveals his secret to her - he is stuck in a time loop, and is doomed to repeat the same hour from 12:01 to 13:00 again and again. She is puzzled and when the clock turns 13:00 he finds himself back in the middle of the road at 12:01. After a few "hours", he spots in a newspaper a physicist who predicted a time loop. He contacts him but he can't help him. Myron shoots himself, but once again he is transformed back in time to 12:01, again in the middle of the road.

Before "Groundhog Day", the idea of a time loop was used in an interesting, at times almost fascinating, Oscar nominated 25 minutes short Sci-Fi film "12:01" based on a genius story by Richard Lupoff. The main difference however is that the main hero, Myron, is doomed to repeat the same hour again and again, as opposed to the whole day in "Groundhog Day". The movie actually starts in medias res, when Myron is already trapped in the time loop and is aware of it: he stands in the middle of the road, then goes to a nearby park to eat some lunch and talks with a kind woman, Dolores. He reveals to her that he is trapped, but she doesn't believe him. It's a very serious film, offering no solution to the dilemma or explanation to the phenomenon, symbolically handing the theme of the daily routine of life, acting almost as a Greek tragedy when ending right when it started in a perfect circle. Still, despite it's virtues, the story is sadly underdeveloped, being too short to fully exploit all the possibilities of the intriguing premise, and the main hero is too passive for a person placed in such a situation. In one especially good scene, Myron looses his temper in the park and defends a homeless man from a few fancy guys in suits, giving him money and saying to them: "Leave him alone! Don't you know how it is to be alone?" As he goes on, Dolores comes walking towards him, fascinated by his bravery and humanity, saying: "That was amazing what you just did". Myron has a small crush on her, but just leaves. It's a pity the film didn't decide to make a intervention and make him do something out of that situation, like the hero in the more elaborated "Groundhog Day" who decided to "control" his faith and try to romantically seduce the woman he fell in love with.