Joe Versus the Volcano 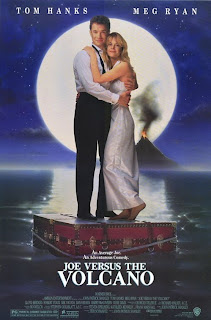 Joe Banks is a nervous hypochonder working in a dark factory. His life is without joy: everything on his job is going on his nerves, from the parking spot, through the strange employees up to the poor lighting in the building. One day his doctor tells him that he has a "brain cloud" and that he has less then 6 months to live. Joe then quits his job and takes his co-worker Dee Dee out on a date, but she leaves him when she finds out he is going to die. He is then visited by the millionaire Samuel who makes him an offer: he will live in luxury for a few weeks if he voluntarily jumps into the volcano on some Pacific island, where the local inhabitants will only sell valuable mineral for a human sacrifice. Joe agrees and sets of on a yacht with Patricia. When they are about to jump into the volcano on the island, the smoke catapults them outside to the see, and Joe discovers he isn't sick at all.

Tom Hanks fans would probably erase a majority of his early films from his career because they represent unambitious and compromising comedies whose mediocrity is their trademark. Among them is the solid, slightly spiritual, childish comedy "Joe Versus the Volcano", a complete mess and a small nonsense that teamed Hanks for the first time with Meg Ryan. Hanks is good, as always, but from awful gags (like the shark and the fishing scene or the industrialist Samuel who can't even explain what kind of semiconductors he is producing in his factory he is in charge of), through the bizarre idea of Ryan playing three roles up to the banal and unconvincing happy end, the film is a carelessly written trash. At it's chore, the story actually represents man's search for the meaning of life and confrontation during a near death experience, and there's one scene that really hits all the marks right: after a typhoon, Joe and an unconscious Patricia are drifting on a raft in the middle of the ocean. It's night and then, all of a sudden, an extremely large moon appears over the horizon, upon which Joe suddenly realizes the beauty of (imperfect) life, saying: "Dear God, whose name I do not know...thank you for my life. I forgot how big...thank you. Thank you for my life." It's truly a powerful moment, but one moment alone can't save the rest of the poorly directed, goofy, chaotic and clumsy film. Hanks' own later film "Forrest Gump" would prove to be much better crafted, emotional and skilfully made besides being spiritual, but just for that scene alone there's an excuse this film actually got made.