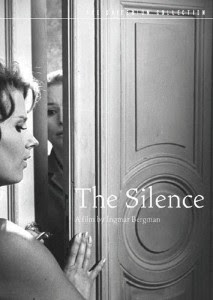 A wagon in a traveling train. Johan, a young boy, is bored, while his mother Anna is too hot, and her older sister Ester is sick and vomits blood. A train conductor is speaking in an unknown language. The trio settles for a few days in a hotel in an unknown, warm country. Johan is playing in the hallway, encountering dwarfs, Ester lies in bed and drinks alcohol while Anna is walking through town in search for a erotic adventure. He meets a waiter and lands in bed with him. Ester explains to Anna she is too sick to continue their journey, so she leaves her behind and takes Johan with her. Ester dies.

Although it resembles his later, excellent film "Persona" that also speaks about loneliness and quiet inferno of the world, metaphoric drama "The Silence" is a mild disappointment from Ingmar Bergman. Static atmosphere created a strong feeling of sickness, despair and anxiety, but there is too much empty walk without any point that crosses into boredom: Bergman rather arbitrarily displays his phantasmagorical scenes (the boy Johan is scrubbing his mother's back in the bath, dwarfs in the hallway of the hotel, a tank driving through the streets in the middle of the night...). The unknown, alien country where Johan, Ester and Anna are visiting by has a equally incomprehensible language (for instance, the word "Kazim" means "bill"), becoming a giant allegory on hermetic society that doesn't understand or ignores individuals. "The Silence" became a surprising hit thanks to it's fame that was revolving around explicit erotic scenes that were a small sensation back then, but by today's standards they seem rather tame. For instance, in one scene Anna is shocked and leaves a theater when a couple starts having twitching intercourse on the seat near her, while in another a lover is preparing to "take" her from behind. Even a scene where female masturbation is depicted is shown, a ground breaking issue in cinema. Still, it seems Bergman just wanted to sustain the audiences attention because he knew the surreal story simply wasn't that interesting.