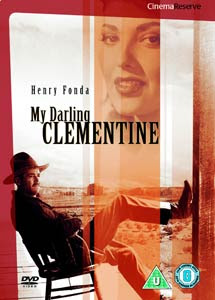 1882. Wyatt Earp, who numerous times tried to become a sheriff, became a farmer who raises cattle in California with his brothers James, Morgan and Virgil. The brothers enter into the town Tombstone one day and notice an outlaw who is terrorizing the inhabitants. Wyatt beats him up and throws out of the saloon, but just as he was about to leave he discovers that someone killed his brother James. Because of that, Wyatt returns to Tombstone and becomes sheriff once again. He meets the half-good half-bad gambler Doc Holliday who is causing troubles, but who is surprised when his former girlfriend Clementine shows up. Wyatt discovers his brother was killed by the Clanton clan so he joins forces with Doc Holliday. Together they kill Clantons at OK Corral.

One of John Ford's problems was that he made too many films causing their quality to vary. But the brilliant melancholic western "My Darling Clementine", Ford's version of the life of Wyatt Earp, is up there on the Parthenon of his best films like "The Man Who Shot Liberty Valance" and "Grapes of Wrath". One of the most fascinating elements in that jewel of western is the transformation of the protagonist Wyatt: at first he is just a farmer traveling through the country, but when his brother gets killed by outlaws in Tombstone he decides to settle down as a sheriff to bring justice, and Henry Fonda's understated performance is superb. Another fascinating character is the good/bad Doc Holliday: at first he tries to make his life miserable (he kidnaps a theater actor but the calm Wyatt rescues him by simply "taking" him with him, casually at the same time taking a bottle and hitting some outlaw on is head) but actually just subconsciously tries to make friends with him, not knowing how to communicate with him. It's a splendid, nostalgic, touching drama, a pure ode to friendship, loyalty and heroic justice, and Ford directs the tight story cleverly, steadily increasing it's level from the tangle up to the climax, once more leaving his instinct to guide him. There are some old black and white films that only half-heartily intrigue you, but this is one instance where even the smallest events manage intrigue you to the fullest.