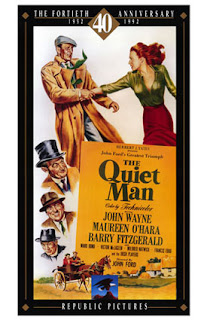 Former boxing champ Sean Thornton, who accidentally killed a man in a match, leaves the USA and returns to his homeland Ireland, where he hasn't been since he was a child. There he meets his old friend Michaleen and from sentimental reasons buys a farm and a house. That act infuriates the unpopular Will Danaher who wanted to buy that farm for himself. When Sean falls in love with Will's sister Mary Kate, he forbids her the marriage out of revenge. Michaleen tricks Will and frees the path for the wedding, but he doesn't manage to ensure Mary Kate's dowry. Sean doesn't mind, but Mary Kate doesn't give him peace because of that, calling him a coward and eventually leaving him. But then Sean looses his temper and convinces Will to give him the dowry, which he then burns. The two men start a long fist fight, but then make up. And Sean even organizes a wedding for him.

The departure of the western veteran John Ford into the genre of comedy was appropriately rewarded: "The Quiet Man" was nominated for 2 Golden Globes (best director, score) and for 7 Oscars, out of which he managed to actually win two, for best director and cinematography. By wining his fourth, and last best director Oscar, John Ford set an unmatched record in movie history, but that decision from the Academy was rather rushed and unsupported since the film isn't that extraordinary crafted, and Ford would himself prove to make better films like "The Searchers". Still, despite its directing skills being overrated, "The Quiet Man" is an accessible and amusing ode of authors in love with Ireland. Ford has a lot of admiration for that country's mentality, but at the same time he doesn't hesitate to criticize some of its useless traditions, like the dowry which seems more important to Mary Kate's character than love.

The story is only moderately funny, but the jokes have charm: for instance, in the exposition Sean asks the conductor for the way to Inisfree and he replies to him: "See that way there? Don't go there, that's the wrong way!" Equally amusing are the dialogue duels between Sean and Will ("I'll count to three, and if you're not out of the house by then, I'll loose the dogs on you." - "If you say three, mister, you'll never hear the man count ten!" or "He'll regret it until his dying day, if ever he lives that long!"), as is the scene where Michaleen is chasing the young couple in a coach, but all of a sudden his horse stops - in front of a pub, on which he adds to him: "Thanks for the tip! Good horse!" Even putting the controversial, terribly dated sequence where Sean is dragging Mary Kate through the meadow aside, the romance and the mood are slightly uneven, the dramatic scenes clumsy, and the film doesn't have much going for it, making it hardly a classic, but even today the nostalgic, simple and amusing story has its charm.