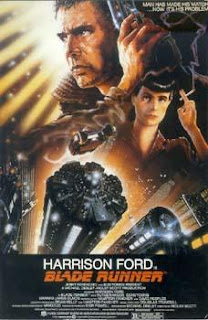 Los Angeles, 2019: Rick Deckard of the LPD's Blade Runner got a new assignment: he has to eliminate five replicants, artificially created humans, that manged to escape from a colony and land on Earth, searching for answers about their lives. Replicants were declared illegal a long time ago and are to be terminated upon detection. In his pursue, Deckard falls in love with Racheal, who is also a replicant. After a big showdown, Deckard attempts to escape from the roof and ends up hanging from a beam. Roy Beatty, the leader of the replicants, saves his life and dies since his 4 year old life span has ended. Deckard leaves with Rachael (in the Director's Cut he starts doubting if he is a replicant himself).

Some films are so good that the critics who see them have to raise their criteria towards rating all other films. "Blade Runner" is one of these films, a Sci-Fi film noir so great that almost every other film in the genre after it tried to copy its style. "Blade Runner's" design and look are very extravagant and remind of some futuristic anime, yet its main virtue is that the story actually has a soul—the core of the film is actually a touching drama about understanding between two different races and a debate about why one should be considered superior than the other. Or that there will always be a need for an order where a lower class will have to do difficult tasks for the upper class. In a way it is actually an allegorical anti-racist statement - if the replicants have the exact same emotions as the humans, why should they be considered different? When Deckard falls in love with Rachael, is that love meaningless since she is a replicant and not a real woman? If a computer would be given artificial intelligence—and then a full consciousness—and then a robotic body—and then an organic, human body—when would the border between between a human and an AI disappear?

Actually, the replicants in some scenes prove to be more human than humans themselves. Ridley Scott directed a few great films, but this is his magnum opus. Basically, the film is actually pretty thin —not much happens, it is all style over substance—but that is all it needs. It is reduced to its essence. It has flaws (for instance, Rachael appears in only four sequences and could have used better character development; the too convenient way Pris stumbles into Sebastian...), but when a movie's concept is done right, it can have a hundred flaws and it won't matter. Equipped with some magical scenes that give chills (one of them is Roy's final dialogue, about how he has seen things "people wouldn't believe. Attack ships on fire off the shoulder of Orion. I watched C-beams glitter in the dark near the Tannhauser gate. All those moments will be lost in time, like tears in rain", before releasing a dove, his soul, from his hands; the other one being Deckard's dream of an Unicorn present only in the '92 Director's Cut), a strange design that creates beautiful aesthetics from the looks of the ugly town of the future, esoteric mood, in which Harrison Ford's acting is actually the least memorable thing, "Blade Runner" is a shining philosophical film that gets better with age.

It truly does get better with age.