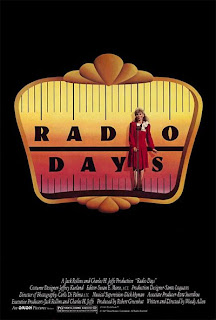 New York, late '30s. The narrator, Joe, is telling how radio influenced his childhood before TV. Joe is an elementary school kid back then and living with his Jewish family in the Queens neighborhood. His father was a simple taxi driver who never spoke about his job. His mother was a caring, but clumsy housewife who often mentioned how she should have married someone else. After listening to his favorite radio show, "The Masked Avenger", Joe decided to buy his hero's ring by pretending to collect money for financing a Jewish state in Palestine. His aunt Bea never managed to find a man for life, although she always dreamed about a wedding. His overweight uncle Abe was obsessed with fish. At the same time, Sally, an aspiring actress, decided to pursue a career in a radio show. In '41, USA entered the World War II. His mother gave birth to his sister, Ellen.

"Radio Days" starts with a brilliant gag; in complete dark, two burglars sneak into a home in the middle of the night. Suddenly, the phone rings, and one of them asks the other to pick it up because "it's making too much noise". The caller is a host from "Guess That Tune", a radio show, and asks him to identify a certain melody, thinking he is talking to Mr. Needleman. The burglars succeed, hang up and rob the home. When the Needlmens return, they find out they have been robbed, but the very next morning they also got the grand prize from the "Guess That Tune" show, not knowing why. If Woody Allen - who doesn't star in the story, but lends his voice to the Narrator - had written similar clever ideas throughout the film, "Radio Days" would have been another one of his classic films. Unfortunately, this homage to Fellini's "Amarcord" starts loosing it's quality pretty soon, not managing to live up to the potential of the opening shots. Allen has been regularly nominated for an Oscar almost every year during that period, but his nomination here for best screenplay was not deserved. His nostalgic take at his childhood just doesn't have enough inspirations for longer than 30 minutes, making "Radio Days" at some parts downright boring, overstretched and stiff. The major problem is that a lot of episodes seem too short and underdeveloped; for instance, the subplot in which Joe saw a woman naked in the window and later found out she is his new elementary school teacher, was dropped right after being introduced. All in all, "Radio Days" is just a nice film that doesn't hit the right tone. All actors are great in their roles, but after his brilliant film "Hannah and Her Sisters", people were simply expecting a lot more from Allen.