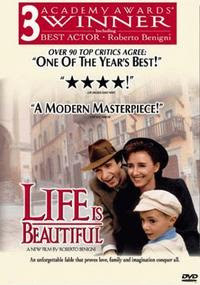 Italy, 1 9 3 0s. Guido, a Jew, moves from the country to a large Tuscan town to become a waiter. There he falls in love with a schoolteacher, Dora. She is already engaged to another man, but Guido stills manages to gain her love using unusual jokes. The two of them marry. The story continues five years later, during World War II: Guido is married to Dora and they have a son called Giosue. Since Guido is of Jewish origin, he is one day sent to a concentration camp with Giosue. When Dora finds out about this, she follows them, although she is not Jewish. In the camp, Guido wants to save his son from the madness of the prison by lying to him that the whole place is only a game and he can win a tank if he gains 1000 points and stays in the camp. During the years, an exhausted Guido dies, but the allies manage to save Giosue and Dora.

The impression of "Life is Beautiful" depends a lot on how the viewers can anwser this question: do corny jokes suddenly become more profound when placed during the time of the Holocaust? One scene illustrates this: the main protagonist, Guido, acts as a waiter and holds a plate, but stumbles and falls on a chair when he sees the woman he loves with another man at a party. After he stands up and gets a hold of himself, Guido does not even notice that he is now holding a dog on a plate. If this corny joke were in a straight comedy, would it really attract that much attention? "Life is Beautiful" is definitely a good and ambitious film that boldly pushes the envelope—but a one which is directed in a clumsy and clowny way, not quite as subtle or up to the task of its ambitious concept. The first, funny and cheerfull half of the film, is weaker because its lame jokes are not that inspired, but ironically, it also at the same time seems very honest and true to comedian Roberto Benigni's wacky persona. The second, serious half of the film, which plays inside a concentration camp, is better, but ironically, it also seems artificial and fake. Roberto Benigni is not making fun out of the Holocaust— he is actually very respectful, showing that even in the darkest, bleakest moments, some people can still love and celebrate life through their honest spirit. He is actually pretty good as an actor in this, but not good enough as a director—he is Chaplin-light. One of the best scenes is the one in which the main protagonist Guido volunteers to translate instructions from a German soldier to Italian prisoners, although he doesn't speak German, so he completely translates everything wrong and presents the whole camp as a silly game. "Life is Beautiful" is a good film, but it seems as if Benigni is at times so heavy handed in its questionable "ignorance is bliss" and self-delusion theme that he at some point acts as a Mr. Bean who got lost in the concentration camp.