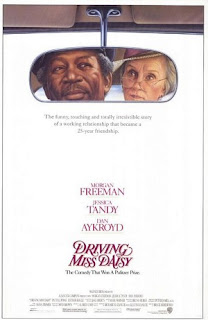 Atlanta, Georgia, '48. The 72-year old Jewish widow Miss Daisy accidentally wrecks her car in her backyard, so her son Boolie hires a car driver for her, the noble and humble African-American Hoke. Despite her stubbornness which causes numerous (comical) misadventures, Miss daisy finally accepts him and breaks the wall of silence, starting conversations about life. In the 25 years of driving, she finally tells Hoke that he is her best friend. Aged, he helps her eat in a retirement home.

Australian director Bruce Beresford accepted the task of leading this risky project, yet it was precisely this small masterpiece that actually became a box office hit in 1989 and collected critical acclaim. "Driving Miss Daisy" is a light story, yet Beresford and writer Alfred Uhry approach it masterfully, with that classic 'good old school' film-making of the golden age of Hollywood, which is why, despite only one tangle, the storyline actually seems skillful and consistent, and not boring. The basis was set up on interesting dialogues and observations, wherein the result was a quiet achievement - easily accessible, applying the serious theme of aging in the most gentle way, and with funny moments in order to avoid turning sentimental - where the loving relations of the stubborn Miss Daisy and her unassuming driver Hoke displays friendship even in arguments. For instance, in one scene Hoke phones her son and informs him he finally persuaded her to accept him as his new driver ("It took me six days, just as many the Lord needed to create the world!") while in another she argues that he arrived too late for her to pack for a long trip ("But you already packed a week ago!"). Here and there the story adds some observations about racism and change in the US society, yet with only three or four scenes it was done so subtle it never seems obtrusive. Awards noticed the movie's quality and gave it 4 Oscars and 3 Golden Globes. Convincing performances were a strong plus point, from brilliant Morgan Freeman, through Jessica Tandy up to a great little dignified role for comedian Dan Aykroyd who was always very proud of this achievement.