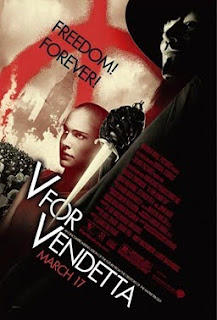 In the future, the British government doesn't just dictate other nations what to do, but also their own citizens, in a full-fleshed dictatorship led by Chancellor Sutler. However, resistance shows up in a masked man only known as V, who wants people to be free again and thus eliminates numerous high ranking officials of the ruling party. He teams up with Evey, who works on the government run TV. While investigating the matter, Inspector Finch finds out the government itself arranged a bio-terrorist attack on a water treatment plant years ago in order to gain universal appeal from fear. On November 5, V manages to kill Sutler and his henchmen, but dies himself. Evey blows up the parliament for him.

Despite turning out hectic and rushed at times, this adaptation of the comic book with the same title by Alan Moore has only a minimum amount of Hollywood concessions and still contains a refreshing dose of subversive ideas that were not bloated just because the original storyline was condensed. Among the omissions are the too "polished" look of the movie as well as some underdeveloped moments, though it tackles the theme of struggle against modern dictatorship with such audacity that it's a delight, containing numerous references to Abu Ghraib, the EU and Bird flu (one plot point even mentions how the government experimented on people in a lab in order to create a perfect virus which would make nuclear weapons "obsolete" because it would "only kill nations but leave their land and resources intact") all the while enriching the story with thought-provoking philosophical dialogues ("People should not be afraid of their governments. The governments should be afraid of their people"; "Artists use lies to tell the truth. Politicians use them to cover up the truth"). The good thing is that "V for Vendetta" isn't just a dry example of social commentary but a gripping and engaging flick that never for a second seems boring, whereas the performances are top-notch, from Hugo Weaving who acts in a versatile way despite hiding his face behind a mask all the time, through Natalie Portman up to the legendary John Hurt as the evasive "guy in charge" Sutler.