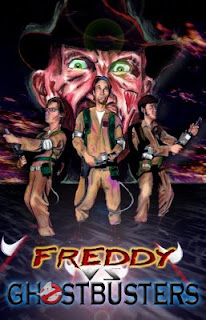 When a green ghost scares customers from a bar, three guys - Neil Anderson, Eugene O'Fitzpatrick and Ed Spengler, the nephew of Egon - take on their "Ghostbusters" suits and equipment, capturing it, thus establishing an extension to the Ghostbuster business. Quickly, they rise to stardom. However, they stumble upon quite a challenge when Freddy Krueger appears thanks to a haunted mattress and spooks around the dreams of Nancy. The Ghostbusters manage to bring him into the real world and capture him into their ghost trap, saving the world.

As many have already noted, in the general lack of "Ghostbusters III" Hank Braxtan's short fan-film "Freddy vs. Ghostbusters" serves as a neat compensation, actually more than just neat since the story is simply contagiously fun. By assembling a fictional crossover of "The Nightmare on Elm Street" and "Ghostbusters", Braxtan and his co-writer Tim Johnson crafted a loving, imaginative and spontaneous horror-comedy that compensates its lack of budget with incredible enthusiasm. Featuring a whole series of childish jokes in a suspenseful environment (a waitress talks on her mobile phone all the time and simply ignores the warnings of her customers and her boss; three Ghostbusters stand besides each other in a toilet to take a leak; in the middle of the story a black screen shows up containing the text "To be continued..." - but it turns out it is just a text on a TV, upon which one character laments with: "To be continued?! I hate it when they do that!"), surprisingly good "no budget" special effects, a tantalizing new context where Ghostbusters take on Freddy Krueger as well as good performances by everybody, this is a work by people who love the characters and the plot they are in, and it shows.
Grade:+++
Posted by Marin Mandir at 6:29 PM