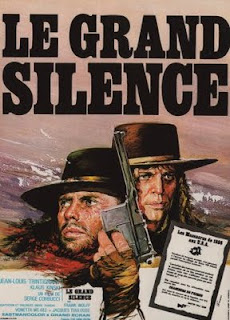 The Wild West, 19th Century. Snowhill is a small village cowered both by snow and outcasts who steal only to feed themselves. However, since they are all on the wanted list, the village became a haven for bounty hunters, among them the cynical Loco who kills the wanted husband of Pauline. She wants revenge and thus hires the mute hero "Silence", who protects outcasts from bounty hunters ever since his parents were killed by those and cut his throat to prevent him from speaking about it. Loco gets arrested by the Sheriff, but escapes. In a showdown, Loco shoots "Silence" and all wanted men to collect the award.

Sergio Corbucci's famous 'winter-western' "The Great Silence" still seems bitter and shocking due to its unglamorous violence - since violence will never seem dated - but also due to some hidden themes about a society were people are only worth something when they are dead. Jean-Louis Trintignant is very good as the hero "Silence" who never utters a single word during the entire story yet the legendary Klaus Kinski almost steals the show as the cynical bounty hunter Loco who shoots wanted people scattered throughout and then returns a couple of days later with a stagecoach to collect them all traveling from house to house. The movie is considered a semi-classic due to two stand-out features, the snowy winter landscapes which are completely opposite to a standard western, and the surprisingly dark ending, one of the most unusual ones in the history of the genre (as a footnote, "Unforgiven" is a better film, yet compared to this achievement, it seems naive to show Eastwood as the 'tough guy' who manages to kill every bad guy at the end, despite everything). Corbucci's rough style is not for everyone's taste, yet it manages to circle out the story despite an occasional empty scene.