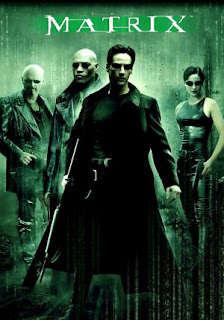 "Sometimes I'm not sure if I'm really awake or if I'm only dreaming..." Computer programmer Thomas Anderson is at times wondering if the whole world is not real, and that hunch will turn out true when one woman, Trinity, and a man, Morpheus, tell him the real nature of "reality": it is actually year 2199, not 1999, and the intelligent robots took over the world and placed the whole humanity under a trans, creating a fake world for their mind, the Matrix. Everything he sees is just an illusion. Still, Thomas, now called Neo, awakens in the real world and feels his real body for the first time, joining them in the fight against the Matrix.

The scene where Keanu Reeves' character Neo dodges a flying bullet in slow motion while the camera rotates around him was a blast back in 1999 and still remains one of the icons of cinema, yet the fact that one moment is memorable and popular does not automatically mean the whole movie is perfect. Namely, as a whole, "The Matrix" somehow seems grey and too fixated to really flow the way it should. Yet it is undeniable that its basic plot concept is brilliantly philosophical: the fact that the people in the story actually live in a fake world in their mind while their bodies are in reality in a "coma" somewhere in a giant container, is eerie-scary because it tickles a few deep human fears on a deeper level, showing an invisible prison we are not even aware off. Some of those uncomfortable moods become too exaggerated and bleak at times, yet they offer a few philosophical debates and parallel many paranoia themes, from Plato's Allegory of the cave, Gnosticism, Holographic Universe, Vedanta up to the fear of a secret Totalitarian society. The Wachowski brothers excelled mostly in truly virtuoso directed action sequences: the point-of-view of the hero while he is getting shot; many details of demolished things and epic explosion scenes in slow motion. Yet, alas, those action sequences last only around 20 minutes, while the dramaturgy and some more spiritual levels completely fail since the dead dialogues and lifeless characters simply can not cope up with them, which is why "The Matrix" leaves a rather ambiguous feeling. A few inconsistencies are also there (why would the bad guy, an indifirent, cold computer program, taunt a captured Morpheus? When Trinity is running from the agents on the roof, why doesn't the Matrix simply stop her by creating a wall in front of her?), yet the main goal, the amount of power of awe, revelation and magical intensity found in the similar and harmonius "The Truman Show", is hardly matched.