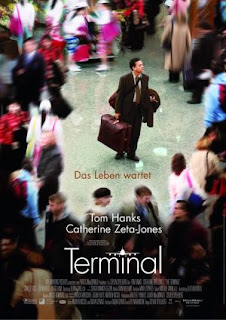 At the JFK airport in New York, Viktor Navorski arrives, a citizen of the eastern European country Krakozhia. But since a coup d'etat happened in his country, his passport is not valid anymore so the chief inspector for immigration Frank forbids him to leave the terminal until the thing is settled. As a person without a homeland, Viktor cannot achieve the last wish of his father - get the autogram of a famous jazz singer. After a few months of waiting at the airport, Viktor learns how to speak English and meets stewardess Amelia, forming a friendship. Finally, he gets his new passport.

"The Terminal" departs from the unusual opus of movies directed by Steven Spielberg in the 21st Century. It is a matter of a gentle little comedy film that is a refreshing surprise in the depressive-dark later phase of the director's career. Still, after two excellent achievements from Spielberg and Hanks - "Saving Private Ryan" and "Catch Me if you Can" - "The Terminal" is a mild disappointment. The interesting satirical concept and neat physical gags with a few slapstick ideas where Viktor lives, sleeps and eats at the Terminal get overshadowed by inert direction, stiff and unconvincing situations as well as an endlessly overstretched ending. Thus, as a whole "The Terminal" is only a solid fairytale about the triumph of one 'outsider', yet overall a fun, light and easily accessible achievement with emotions.