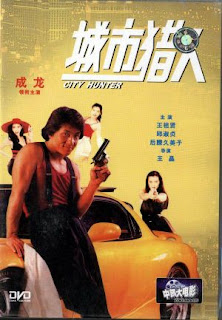 The succesful private detective Ryo Saeba, nicknamed City Hunter, lives in Hong Kong with his assistant Kaori, the sister of his murdered partner. One day he gets the assignment from the rich businessman who is looking for his missing daughter Kiyoko. Ryo and Kaori find her on some ship, but she gets away. But bigger problems show up: criminal MacDonald and his gang take the rich passengers as hostages. Still, Ryo saves the day and returns Kikyo to her father.

Action comedy "City Hunter", the live action adaptation of the popular Japanese animated show with the same title from '87, is a proportionally successful achievement without deeper ambitions in which the silliness is so charming and fun that one can easily forgive the stories prepotency. Unlike some unsuccessful adaptations of animation that had little in common with the original, "City Hunter" stayed faithful to the pattern since Jackie Chan looks very similar to the hero. One of the best jokes is the one where the wacky Kaori tries to wake up the sleepy Ryo by driving a car with him sleeping on the roof, but equally good is the one where she imagines to hit him with a giant 1 ton hammer across the head. The whole story is extremely dynamic, with jokes that seems as if they came from some cartoon (the fight between Ryo and the blond bad guy is crafted to resemble a video game) and only occasionally turn out forced and dumb. Still, like most comic book adaptations, this one also presents the (super)hero bellow the level of his potentials of the vast comic book.