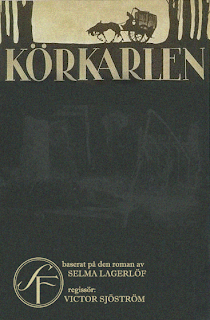 New Year's Eve. Salvation Army girl Edit is lying sick in bed and begs her brother to find David Holm - who is, coincidentally, again spending his time with becoming drunk with his friends. They start talking about their late friend Georges who told them that the last person who dies on New Year's Eve will have to drive drive the phantom carriage and collect the souls of the dead. When David refuses to see Edit, the friends start an argument and accidentally kill him. Then the phantom carriage arrives, driven by Georges, who shows David his life: how his wife left him when he became an alcoholic and how Edit prayed for his salvation. David is crushed and returns back to his body. He immediately stops his wife from committing suicide and promises he will change himself for the better.


"The Phantom Carriage" is one of the handful of silent Swedish films that stand out as classics in that era not only because it was qualitatively ahead of its time, but also technically. Director and actor Victor Sjostrom could have easily messed up the difficult story, as some other lesser director would have, but thanks to his skills he managed to make an excellent film that plays both with numerous flashbacks that reveal the personalities of the characters as well as primitive special effects (the ghost of the phantom carriage and the ghost of David are transparent) with an easy hand, as if it was a normal thing back in the 20s. Even though some describe it as scary and frightening, the film actually unfolds as some sort of a Swedish version of Dicken's "A Christmas Carol": the ghost of the phantom carriage shows the egoistical David his misguided past, present and even a glimpse of future, which opens his eyes and makes him undergo a profound transformation towards a sensible human being.

Thus, one of the strongest moments in the film is precisely a dramatic one, where Edit, a member of the Salvation Army, sewed all the holes on David's worn out jacket while he was sleeping, yet when he wakes up he defiantly annihilates all her effort by simply tearing it up in a few seconds. It's both touching, sad and haunting. Still, despite the fact that it is a story about redemption, it also contains a few scary moments, mostly when it shows how the driver of the phantom carriage (wearing a black hood and a scythe, an icon of all the future movie personifications of Death) drives and collects the souls of the dead, and among them is also one genius scene where the carriage simply walks on the surface of the sea, stops and the driver dives bellow the water to collect the soul of a man who drowned. There is even one sequence that greatly influenced Kubrick's "The Shining": the one where the wife locks the alcoholic David inside a room and rushes to prepare her children to leave the house, but David takes an axe and makes a hole on the door to escape. Sjostrom leads the story in a very even and measured way, which is why the movie works both as a fantasy and a drama.