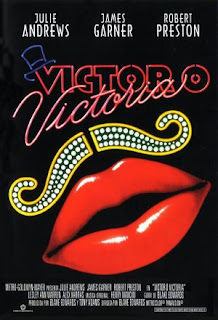 Paris, 1 9 3 0s. Singer Victoria is unable to find work and has no money, so she barely manages to escape from a restaurant where she ordered a feast but tried not to pay by planting a cockroach in her food, but she makes a friend with gay performer Todd. He takes her into his apartment and persuades her into a strange idea - to play a gay man who plays a woman on stage. The idea is a curiosity, but she really manages to strike a success as Victor/Victoria in a nightclub. But mobster Marchand from Chicago doubts Victor is a real man, even though his girlfriend Norma has no doubts. Marchand kisses Victoria and she confesses she is a woman. But Norma brings mobsters from Chicago who mistakenly think Marchand became gay, so Victoria publicly reveals she is a woman through striptease.

Even though Blake Edwards directed stiff-lascivious movies like "S.O.B." and "Ten", there is no doubt that his excellent comedy "Victor/Victoria" is a thoroughbred crafted classic. It's as if a completely different Edwards directed the movie. Julie Andrews excellently plays the singer Victoria who plays a man - who plays a woman - which is why the story, just like every transgender flick, offers some secret observations about the difference between genders and gay orientation since mobster Marchand falls in love with her so he isn't sure if he loves a woman or a man; this is brilliantly summed up in one simple scene in the nightclub, just after Victoria finishes her act, but removes her wig and presents herself to be a man to the public, which causes the delight to shift from womanizer Marchand, who stops clapping, to his girlfriend Norma, who suddenly starts clapping, seeing an attractive man in front of her.

The movie wouldn't have been half as good if it weren't for Andrews inspiring androgynous performance, but she is equally matched by the genius Lesley Ann Warren as the shrill blond Norma - the scene where she sits in bed, looks at Marchand and tells him "Heeey!" in a mischievous way, is nothing when one writes it down, but everything in comedic sense when one actually sees it on the screen, as well as the amusing finale where Victoria strips in front of Norma to show she is a woman. The overlong musical sequences and a few misguided gags are bothersome, but when a movie is crafted right it's hard to become wrong so easily: the person who came up with the joke where a man is balancing and standing with his stick on a bottle, with his legs directed upwards, but Victoria's high pitch voice causes the bottle to shatter and him to fall, is genius. The music won an Oscar while Andrews won the Golden Globe as best actress in a musical or comedy, but the award for best picture musical or comedy went to the better "Tootsie's" hand.