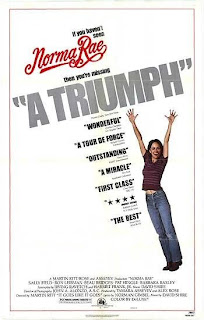 Norma Rae is divorced, has two children and lives in a province. She works as a minimum-wage worker in a textile factory together with her parents and feels exploited. One day Reuben Warshowsky, a union organizer from New York, arrives in town and is treated harshly by everyone. While having another wild affair, Norma is kicked out from the motel by her lover and accidentally stumbles upon Reuben who intrigues her with his plan to get workers a decent salary. Even though they can't find a place to hold a meeting since even the church boycotts them, the workers slowly start to support them. After her father dies from exhausting work, Norma starts a crusade and in the end manages to organize a union.

Another very well made piece of rebellious 70s social criticism, drama "Norma Rae" is a simple and accessible, but in no way flat story based on real events that gives a rarely seen insight into the hard lives of minimum-wage workers in a textile factory. Director Martin Ritt handles the film with a quiet, subtle hand, never blatantly accusing anyone, but always trying to remain neutral, which isn't a small thing when someone has to direct such scenes as the one where Norma discovers her mother lost her hearing for a brief moment since she works the whole day in the terribly loud machinery or the one where Norma's father doesn't want to have anything with the union organizer Reuben because he is so uninformed he thinks it has something to do with Communism. Sally Field maybe overacts in a few scenes towards the end, but she rightfully won an Oscar, a Golden Globe and best actress award at the Cannes festival for her powerful performance as the title heroine, and it's interesting that she clearly isn't idealised since the authors show her as a woman who has courage on one hand, but is also very "loose" since she has two children from two different men and changes her men more often than her socks. The film has troubles with it's running time and it's straight forward approach deflates the concentration of the viewer after a while, yet it's hard to dismiss it for it's sheer enthusiasm.