Bore Lee in the Claws of the Big Z 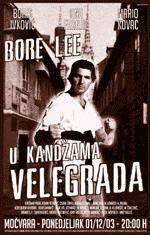 Bore Lee, karate fighter from Sinj, arrives to Zagreb via train in order to learn Yoga and relax better. He becomes the student of teacher Anayoga and falls in love with her. But Bore can't cope in the huge city while two troublemakers order him to give them his money, so he beats them up. Also, Bore prevents a robbery in the club Močvara. But those men are actually members of a notorious gang whose boss wants Bore in order to become king of the underground. Thus the gang kidnaps Anayoga, so Bore is forced to work for them. Still, he beats them up and wins, but they kill Anayoga, so he returns to Sinj.

Amateur Boris Ivković, obviously inspired by Bruce Lee, invented the nonsensical fighter hero Bore Lee and used avarage home cameras to shoot amateur movies about him. The feature length film "Bore Lee in the Claws of the Big Z" broke in ice in Croatia and became his first flick to get a regular DVD distribution, but disappointed the critics. When the viewers finally checked the movie out due to it's hype, they quickly discovered it's just a piece of trash, and not particulary fun either. Except for terrible technical conditions (the camera lens is foggy at moments, some dialogs can't be even heard entirely) even the sole story is terrible, lethargic and too serious. It's just Ivković trying to imitate Segal. Some fragments are confusing, like in the scene where Bore speaks with himself ("I'm a beliver and that's why I'm going to listen to that preacher on the square!"), while the best parts the ont that are spontaneous and at least partly try to insert humor in the silly story: the bad guy summons his "Virgins of evil"; Bore beats up a rival and all of a blue some dog runs into the shot and starts barking at them.